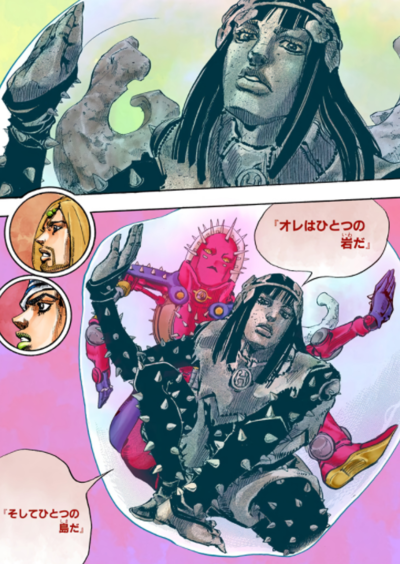 For the Stand with the same name see: I Am a Rock.

It continues the fight between Josuke, Norisuke, and Yotsuyu Yagiyama and their discovery of a mysterious fruit.

Using Yotsuyu's scent from Yasuho, Norisuke manages to find the architect in his rock form. Scratching the rock skin with a boulder, and seeing it bleed, Josuke and Norisuke are puzzled by Yotsuyu's true nature. Yotsuyu uses their momentary distraction from observing the canisters of pesticide converging toward Josuke, Yotsuyu appears before them and declares that he will obtain the Higashikata's wealth and that Josuke is checkmate before disappearing again when Soft & Wet punches him away.

Knowing that Yotsuyu will use Yasuho against him, Josuke chooses to go on the offensive and foregoes defending himself against the canisters. Spotting Yotsuyu from the bleeding scratch, Josuke imprisons him in a bubble and begins to transport him to the coast. Yotsuyu reveals his Stand, I Am a Rock, and pops the bubble with converging rocks as the canisters of pesticide reach Josuke.

Covered in pesticide, Josuke nonetheless pushes Yotsuyu off the cliff with him and both fall into the sea. Communicating underwater with his bubbles, Josuke envelops Yotsuyu who changed into his rock form to protect himself in several fishnets thrown by Norisuke at his request. Josuke gives Yotsuyu a choice, either revealing him who he is, or face lingering underwater forever in his rock form for fear of drowning. Enraged, Yotsuyu only reveals that he killed Josuke earlier and that Kira saved him. Attacking Josuke again, but beaten, Yotsuyu starts breaking down and dies, only saying that Josuke will be betrayed by the Higashikatas in his dying breath. At the same time Josuke spots a mysterious fruit sinking in the water from the architect's bag.

Pulling Yotsuyu's remains off the water, Josuke and Norisuke inspects them, still baffled by Yotsuyu's rock physiology. In the bunker, Tsurugi sees his grandfather and Josuke come back with Yasuho and take her to the bedroom, and reveals that after investigating Yotsuyu, he couldn't find any address or bank account despite his qualifications as an architect, raising the question of where does Yotsuyu come from and how was he raised and educated. Tsurugi then asks if they have seen the cure for the disease, which first being denied its existence by Norisuke, is then confirmed by Josuke when he reveals that he saw a fruit sinking down the sea. Linking that fruit to a possible motive for his presence in Morioh, Josuke decides to investigate the fruit to uncover his past. In the bedroom, Yasuho discovers a piece of the mysterious fruit in her pocket, and goes back to sleep.[1]

(1st full appearance) (Death)
I Am a Rock