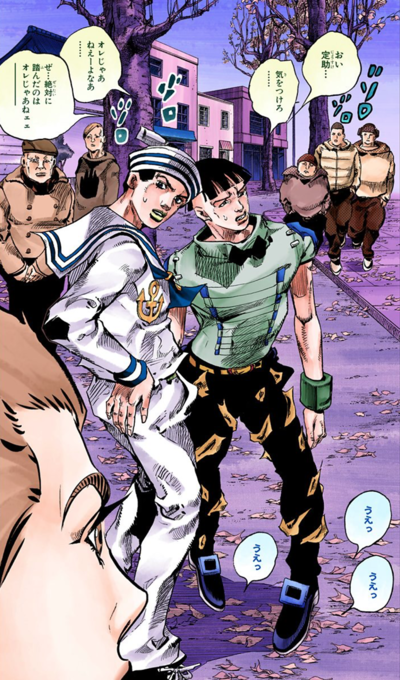 It narrates Josuke and Joshu's misadventure in Shakedown Road, where they repeatedly get extorted their money.

The next day, at the breakfast table, Josuke asks Norisuke for a cell phone, as well as the chance to go to school. Norisuke agrees, but orders Joshu to escort him.

Joshu tests Josuke with a trigonometric problem, which he solves, before Joshu asks him to walk with him to a different high school, as a favor. Josuke and Joshu travel to Shakedown Road, known for its kleptomaniacal community. Joshu hopes to record himself being robbed in order to complain with evidence to the police for an earlier crime.

Arriving, Joshu unknowingly breaks a child's "compact" toy before her mother demands compensation; as does Josuke a turtle tank in a nearby store window, apparently killing the turtles inside; for which the store owner extorts Josuke for ¥20,000 and a plan to pay off ¥330,000. Joshu captures the event with his phone; discovering that Josuke had stepped on leaves, rushed almost instantly to the tank, and then back, unaware.

Continuing, Josuke is confronted by three men who had been watching from afar, who accuse Josuke of having made one drop his cell phone into a puddle. Watching another recording just made, Josuke sees himself again slide backward, knock into the man, then return to his original position, again unaware. The men propose that Josuke deliver a package underneath a nearby flower pot to a nearby woman as compensation. Having been set up to exchange an illegal substance, the two are soon arrested by a pair of police officers also observing.

Joshu meanwhile analyses mysterious actions between the woman and the gangsters during the exchange, localizing the effect to the ginkgo leaves scattered on the ground; and intercepts their exchange of money, fleeing. While Josuke is pinned by the policemen, the gangsters notice Joshu's sleight and give chase, easily catching up using the ginkgo leaves. 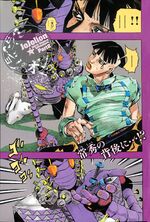 Preparing to beat him, a nut and screw suddenly materializes on one of their hands. Confused the man unscrews it, causing his hand to detache from his wrist. Panic rises among them as his other hand falls and more screws form, before Joshu's Stand, Nut King Call, is fully revealed. Joshu escapes, reversing his Stand's effect; before discovering his stolen money is in fact composed of leaves.

The policemen discover Josuke's package contains only candy, and release him. Josuke reveals he had also deduced the power of the gingko leaves, and during its exchange had taken the money for himself with his Stand, which with he pays the pet shop owner in full for his case and turtles.

Josuke then makes a call to Yasuho while she is in class. Seeing Joshu's caller ID, she doesn't answer, but noticing the origin of Josuke's call on her phone's map, Yasuho takes interest in a nearby landmark named Joestar Jizō. Using her Stand ability, Yasuho learns that the monument was built as a memorial to a horse jockey named Johnny Joestar. Meanwhile, at Shakedown Road, Josuke comes across the statue and notices that the man the statue depicts has a hat similar to his own. The old pet shop owner decides to tell him the legend behind the statue, which he himself heard from his grandmother.

Though Johnny came to Japan to teach military horsemanship, this was a cover up for his true intention: to save his wife, Rina, from an incurable disease. Johnny, filled with an unbearable amount of grief, decided to do the unthinkable and returned to New York to steal the coveted Saint's Corpse, the only hope of removing Rina's disease. Narrowly escaping government pursuers, Johnny took the corpse back to Japan and hid it beneath the Meditation Pine near Morioh's coast. Johnny used the Saint's Corpse to cure his wife, but the disease was passed to his son, George Joestar III. Using Tusk's ability to force the curse out of George III, Johnny chose to take the curse upon himself. Tusk's ability then shot him in the head and knocked him to the ground, where a large boulder falling from above crushed his head.

With the old man's story finished, Josuke realizes that Rina was also a Higashikata, and that his involvement with the Joestar and Kira families may not be a coincidence.

Meanwhile, Yasuho returns to the Wall Eyes and the spot where she found Josuke. She pulls out a newspaper article dating back to Nov 13, 1901, the date Johnny Joestar was murdered. On the same day, the article tells of a one to two year old soaked infant miraculously recovered near the Meditation Pine wearing a necklace of gemstones. Yasuho suddenly notices a hole in the tree's roots, in time to see a hand reach out of the hole and drag her beneath the tree.[1]