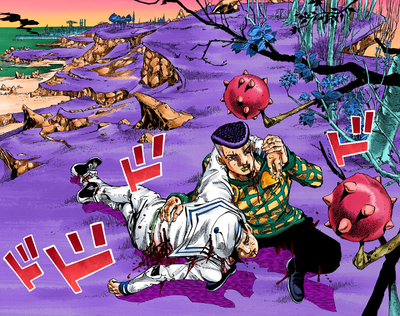 It narrates the circumstances of Josefumi Kujo and Yoshikage Kira's deaths, and the birth of Josuke.

Back when Josefumi was a little child, he once almost drowned at the beach when his neglectful mother Kiyomi hesitated saving her son from a failed relationship. Fortunately for the young Josefumi, Kiyomi's conscience pushed her to save him, but he was already unconscious from lack of oxygen and hitting his head against the rocks. Brought to the hospital, Josefumi was saved by Holy Joestar-Kira and her son Yoshikage, who performed surgery with his Stand.

Back to around two years ago, Aisho Dainenjiyama is conducting a trade of the Locacaca for 200,000,000 yen with star baseball player Atsunori Iwakiri. Both are spied on by Yoshikage and Josefumi, who see first hand the potential of the Locacaca when the baseball pitcher fully recover from his shoulder injury and greatly performs during the baseball match. Kira pretends to want to steal the fruit only for the money, but Josefumi tells him that he knows that Holy is ill and needs the fruit. Out of respect for both, Josefumi accepts cooperating with Kira in order to steal the fruit. Moreover, he demonstrates that they can reduce the risks by only stealing several branches and grafting them to harvest the future fruit at their leisure.

As Aisho leaves the stadium, Kira and Josefumi trail him. By distracting Aisho with the help of an eye medicine and an engineered motorcycle accident, Josefumi manages to open the briefcase where the Locacaca is, take several branches and graft decoys in their place. The heist is a success.

In the present, Tamaki Damo interrogates Norisuke Higashikata IV, and asks him who killed Yotsuyu Yagiyama. Damo has to cut off Norisuke's arm in order to make him confess that he killed Yotsuyu, but Damo correctly guesses that someone else was helping him.

A flashback demonstrates how Holy's condition has worsened, and that she has trouble remembering her son. The narration goes to August 19, 2011. In Yoshikage's boat, the two young man discuss the grafted branches' condition, with Josefumi announcing that the fruits are almost ripe. As they approach the harbor, they see Karera Sakunami who has been stalking Josefumi for quite some time. However Yoshikage sees that Damo and Yotsuyu have boarded his sailing boat. As Damo reveals how he noticed the theft and traced it back to them, Vitamin C easily disables Josefumi and Yoshikage while overpowering Killer Queen. Damo vents off some frustration on the powerless Kira, cutting off his liver, and then announces that he will spare one of them. Sensing a kind of responsibility for failing to protect the secret of the Locacaca, Damo decides that whoever tells him first about where the grafted branches are will live. He pushes Josefumi to reveal it, who almost confess, but Kira interrupts him, announcing that allies will come help them. Damo doesn't believe the surgeon at first, but sees Karera approach the boat. Yotsuyu sends I Am a Rock to pin Karera on the ground, but it is too late for the Rock Men to stop Kira's attack. Having hidden Sheer Heart Attack inside Karera's hair, Kira manages to make them explode, destroying a good part of the harbor and sending everyone into the water.

Josefumi and Kira drift along the coast up to the grafted branches' location where Josefumi drags the already unconscious Kira to the branches and plans to feed him one of the fruits. At the harbor, Damo sends Yotsuyu and the A. Phex Brothers after Josefumi, wanting his subordinate to sweep the coast. At the same time, Karera is hiding behind some of the debris. Josefumi tries to feed Kira one of the fruits, but Kira doesn't react, his empty gaze indicating that he most certainly is dead. Josefumi eventually uses Soft & Wet to forcefeed Kira.

In the present, Josuke reveals to Hato that Damo is an enemy and that they must fight him. Back to the past, Kira is seemingly healed, but Josefumi's face begins to crumble away, making him realize that the Locacaca he cultivated are different. While the Rockmen sweep the coast, wary of the incoming tsunami, Josefumi notices that Kira also has metal pieces embedded into his skull. Josefumi weeps as he realizes Kira also protected him from the blast. When the A. Phex Brothers meet and confront Josefumi, he promptly defeats them both and sends them into the cliff. Having no other choice, Josefumi confesses to the dead Kira that he secretly thinks that he should have died on the beach the day they met. Happy to have lived this long thanks to Holy, Josefumi sacrifices himself and takes the last fruit from the branches, hoping that Kira will be able to harvest them. He destroys the Locacaca, feeds it to Kira, and performs an equivalent exchange with him. Norisuke and Tsurugi are seen going back to their home to protect themselves, and a piece of the Locacaca is picked up by Iwasuke. At the same time, the earth opens under Josefumi and Kira, and both fall into a fissure.[1]