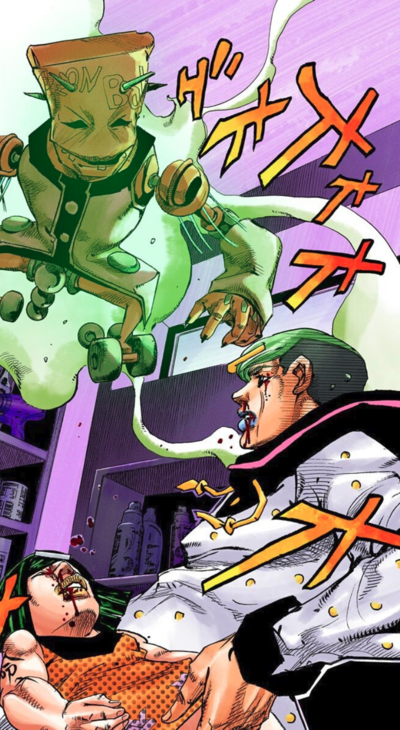 This arc narrates the attack on the Higashikata house by Poor Tom and his Stand Ozon Baby which manipulates the atmospheric pression around the house.

12 days, 4 hours and 33 minutes before the harvest, Jobin remembers a day at Morioh Stadium with his father, where a disagreement over the future of the Higashikata Fruit Company led Jobin to meet Yotsuyu Yagiyama and his companions. Remembering his goals, Jobin moves to bury Ozon Baby in the family orchard. Two and a half hours later, Jobin is approached by his son Tsurugi and Iwasuke. Tsurugi asks his father about the toy house he saw the latter bury beneath the orchard. Suddenly, Tsurugi and Jobin's noses begin to bleed, and Iwasuke cries out in pain. Seeing many sealed containers being crushed outside the window, Jobin warns Tsurugi to not open the door. Tsurugi nonetheless exits the room into the garage, where he meets with Ozon Baby's misshapen true form. Before it can react, Iwasuke cries out in pain before Ozon Baby and, bleeding from all orifices including the eyes and ears, collapses. The same begins to happen to Tsurugi, and Jobin understands that he has been trapped.

12 days, 2 hours and 11 minutes before the harvest, Josuke and Mamezuku arrive at the Higashikata estate through a series of underground passages. Mamezuku explains that Yasuho returned home to investigate the broken Hair Clip she assumes to be a Rock Animal, which may provide a clue to their assailants' identity. Emerging at the surface, Mamezuku immediately identifies the Locacaca branch and announces that in twelve full days, a small fruit will have grown from it.[1]

Trapped in the laundry room, Jobin realizes that Ozon Baby is an automatic Stand which will indiscriminately attack anyone in its range. Managing to bring Tsurugi back to safety, Jobin also roughly grasps the enemy's ability: Ozon Baby can decrease the air pressure in a zone, but any closed space will dampen its effects. Determined,they set the orchard on fire by using origamis and Speed King to spur their enemies into action.

Indeed, Poor Tom rushes into the orchard to retrieve the branch while Josuke and Mamezuku go out, protected by Soft & Wet's bubbles. They meet just as Mamezuku takes the branch and a fight ensues. Poor Tom takes out Rai and seize the branch but is poisoned by a yew seed. Pursued by Josuke, Poor Tom is bluffed into cancelling the air pressure ability, but his supposed allies from the hospital have arrived.

Surprisingly, Poor Tom is killed by a mysterious ability shooting through his head. An unseen person seizes the branch and drives away before Josuke can do anything. However, it is revealed that Tsurugi used Paper Moon King into tricking everyone: an ordinary branch has been fought over while Jobin stole the real Locacaca branch. They hide the branch, grafted into a cactus. Meanwhile, the ambulance driver discovers the trick and guesses that the arsonist is the one who has the branch.

Finally, Josuke returns to Mamezuku, revealed to be alive and slowly reconstituting himself. Desperate, Josuke can only observe his total loss.[2]

(1st appearance) (Ability only)
Wonder of U