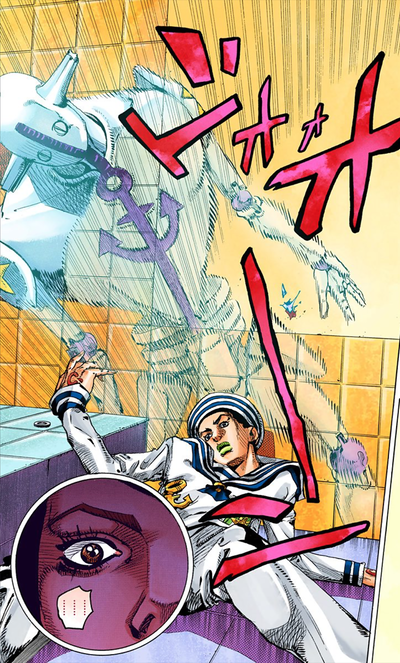 It narrates the man in the sailor hat and Yasuho's investigation of the former's identity, leading them to Yoshikage Kira's apartment, where they find a female hostage, and are all suddenly ambushed by an assailant above them.

Yasuho then narrates about the origins of a curse based on different interpretations. All interpretations are different but incorporate an ominous element, and so curses should be broken. Asking herself many questions about the man she just saved, Yasuho also mentions with astonishment that she noticed the man had four testicles at his crotch.[1]

Yasuho later visits the man at a hospital. Set on discovering his identity, they escape. Yasuho notices that the label on the mysterious man's hat comes from a shop called "SBR", so they head there. Seeing the two leave from his hospital room window, Joshu feels jealous and notices the bite marks on his knees before collapsing from a fever.

At the SBR hat shop, Yasuho and the mysterious man show the shopkeeper the hat; they discover that the man bought his hat there three days prior, revealing a record of the sale to a man named "Yoshikage Kira". The shopkeeper also shows the two Kira's address, which is an apartment building. Going to the apartment, Yasuho believes that "Yoshikage" does not suit the protagonist, and nicknames him "Josuke", after her childhood dog.

In Kira's apartment, they find a sailor's outfit that seems to fit Josuke well. Then they hear noises from the bathroom. When they investigate the bathroom they find a young woman bathing in the tub completely naked. Yasuho assumes the girl to be Josuke's girlfriend, but then the naked woman pleads the two for help, to Josuke and Yasuho's suspicion. Then Yasuho finds a photo album. In the photos is the mysterious woman having bound sex with what appears to be Josuke. Devastated and convinced that Josuke is a sadist, Yasuho flees the apartment, shouting at Josuke to leave Morioh and never return.

Josuke demands an explanation from the woman. She states Josuke was a captive with her before escaping three days prior, and that she assumed he had returned to help her escape. She mentions that their captor resides on the floor above them, and that he has a limb-controlling power that activates when his victim is directly underneath him. She is already in full control, and relies on Josuke to save them both.

After saving the naked woman from instances of self-harm puppeted by the enemy Stand, Josuke reveals his Stand, Soft & Wet, and is violently forced to overcome the attacks targeting him. The naked hostage makes a deal with the Stand user above them for her own safety. For mercy, she tells the man where Josuke is hiding and leaves Josuke to die. However, her getaway is interrupted by Yasuho, who returned after contemplating and realizing she must have mistaken about the photos. Then Yasuho realizes she's been pulled into the situation. Josuke eventually manages to grab the attacker and interrogates him.

The man identifies himself as Ojiro Sasame, a surfer seeking revenge against Yoshikage Kira, whom Josuke closely resembles (in dress as well as in body). Ojiro explains how Kira constantly asked him a question which eventually made Ojiro insane and led to consuming his own fingers. In revenge, Ojiro rigged all sorts of traps in Kira's room; he notably captured a woman and set her up naked in the bathroom both as bait and to frame Kira of kidnapping and rape; it's also revealed that the man in the bondage photos was Ojiro disguised as Kira in order to frame Kira further. Yasuho then points out a photo of Kira with the Wall Eyes in the background, where Josuke first appeared. They knock Ojiro out, and travel to the site of Kira's self-portrait.

Arriving at the Wall Eyes, buried deeper, they discover the body of another man. Narrated after the fact, an autopsy reveals that the body belonged to Yoshikage Kira, who is assumed to have died of cardiac arrest three days prior. The strangest part is that Kira was missing his testicles.

Afterwards, Josuke is adopted by the Higashikata Family, which included Joshu. They all greet him, and give him the name "Josuke", like Yasuho did. Meanwhile, the woman from before, who fled during Ojiro's interrogation, hides her naked body in a trash can, still lost. She laments about going back home, but ends up humiliating herself in front of two boys who bumped into her.[2] 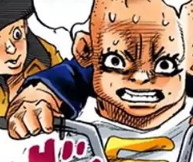