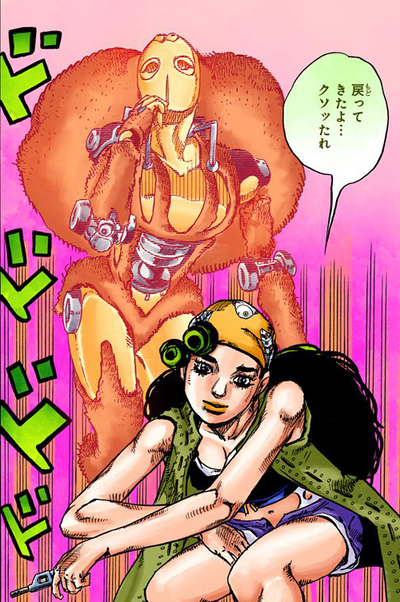 It narrates Josuke's meeting with Karera Sakunami, an eccentric woman who seems to have been acquainted with his former identity.

The next day, Yasuho and Tsurugi analyze the video feed of Aisho's death, realizing the strange nature of the people they are going after and determined to investigate the stadium. They meet Josuke and since Yasuho and Josuke are too happy to see each other to continue the investigation, it is paused for the time being.

Josuke and Yasuho stroll on the beach, sharing a tender moment, however Josuke is signaled by another girl, calling for a meeting later. Josuke follows her, intrigued since the woman acts as if she knows him, calling him "Secchan". His suspicions are confirmed when she mentions Yoshikage Kira, but finding something unfamiliar, she flees. Using Soft & Wet to learn her name, Karera Sakunami, Josuke calms her worries about him, and opts to fake knowing her until the moment she tells him his real name.

As Josuke follows Karera, he is dismayed at Karera's flighty behavior, going to random places and conning people with her Stand ability. She eventually shows Josuke a photo of her, Kira, and a third man, and reveals his name: Josefumi Kujo. Josuke catches a glimpse of her Stand Love Love Deluxe and continues to follow her. Meanwhile a pair of twins playing football, the A. Phex Brothers, track Karera.

Karera then goes to Kira's apartment, but upon being announced Kira's death, freaks out, asking for the circumstances of his death, Josuke mentions the heart attack, but doesn't mention he was present at the crime scene. Karera reveals that she saw Kira hide a Locacaca tree in his apartment, Josuke being clueless of what she's talking about but suspecting a link with the mysterious fruit.

Karera is suddenly held by one of the A. Phex Brothers, who uses his Stand Schott Key No.1 to douse Karera with gas, which he ignites. Josuke saves Karera, who flees, and the Brothers opt to kill Josuke first.

Two double pages disclose many details about the Rock Humans, their physiology, their habits, and their manners.

A fight ensues between Josuke and the A. Phex Brothers. Josuke manages to block Schott Key No.2's poison gas, when the elder brother grapples him and shifts some poison gas from his left hand to his right hand, Josuke plunders the poison gas and takes him hostage with the bubbles around his head. When the elder, soaked with gas, is ignited by Karera, his brother runs toward him, forgetting the bubbles which pop and envelop him in poison gas. Both Rock men are consequently killed. Karera, finally understanding that Kira and Josuke performed an equivalent exchange, goes away before Josuke can ask her anything else.[1]