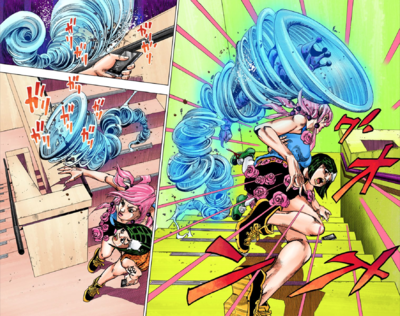 It narrates Yasuho and Tsurugi's disastrous attempt to trail Aisho Dainenjiyama, which transforms into a struggle to escape his Doobie Wah!.

Observing the place where Jobin met the man from a roof, whom Yasuho identified as Aisho Dainenjiyama, a security guard at the baseball stadium nearby, Yasuho and Tsurugi uncover a link between Aisho and Yotsuyu who oversaw the renovation of the stadium. They see Aisho at the same place heading to a nearby park and decide to tail him with Yasuho's phone folded into a frog. They witness a man who, after eating the fruit, regrows his missing legs while his eyes shatter into stone. As the phone is sent investigating the remains of the fruit, it is spotted by Aisho who crushes it under his feet.

Affected by the damage, Yasuho and Tsurugi are nearly killed, but Aisho stops his attack when he kicks the phone away and attempts to phone Yotsuyu. Startled by the lack of answer, Aisho attempts to crush the phone again, but is distracted by a banana peel Paisley Park placed under his feet, allowing Tsurugi to use his Paper Moon King. Aisho is unable to recognize the phone and it subsequently escapes. Having checked Aisho's access card, Yasuho determines that the fruit comes from inside the stadium. As they both go down the stairs, they are assailed by Aisho's Stand Doobie Wah! hiding in a deadly wind vortex. Escaping the building by a window, they realize that Doobie Wah! is materializing via their breath, forcing them not to breathe as they try to flee.

Aisho realizes that the two are Stand users tracking him and vows to kill them, following Doobie Wah!'s trail. At the same time, Yasuho and Tsurugi go on a bus, hoping to get out of the Stand's range, but Doobie Wah! materializes inside the bus, trapping them. Holding their breath to stay undetected by Doobie Wah!, the two are soon forced to inspire. When Aisho calls Jobin and reveals to him that someone was investigating him, Jobin immediately links that with Josuke's strange behavior, and stays silent, unknowingly agreeing that Aisho kills his pursuers, one of whom is Jobin's own son.

A flashback details Aisho's past: he used to live in a house with a girlfriend, but when he revealed his true nature as a rock man, his girlfriend used a period of sleep to sell the house, nearly killing him in the process when it was demolished. In the present day, Yasuho and Tsurugi leave the bus near the Motoyagura train station, and Tsurugi releases a car origami.

Continuing the flashback, Aisho was saved when Yotsuyu woke him up and lamented the loss of his house. Still following his Stand, Aisho spots Jobin Higashikata wandering in the streets. Soon after both meet a cornered Yasuho and Tsurugi. Recognizing Jobin's son, Aisho demands that Jobin allows him to kill him, but Jobin remains silent. The car origami Tsurugi released comes back to his hand, and Tsurugi explains that he made Aisho confuse any bus with his father. When the bus starts up, it runs over the confused Aisho who is killed and breaks down into dust.[1]

(1st appearance)
The Old Man in the Wheelchair