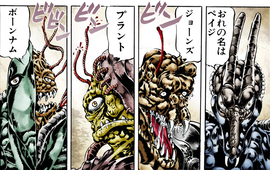 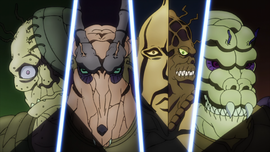 Page: Has a head resembling a canine's skull with long segmented horns above his eyes extending past his head. Small veins stick out of his horns and the back of his head. The back of his head also has a visor. Page wears a loincloth and a belt with a skull emblem. He is the skinniest zombie compared to the others.

Jones: Jones has a face slightly resembling an alligator but with two prominent front fangs extending from his nose. The top of his head appears tumorous with small veins sticking out.

Plant: Plant's face resembles a deformed human. His nose and mouth are wide and he has a long drooping bottom lip. His most prominent feature is a round shield stitched onto the side of his head, covering his left eye. His skin has various tiny bumps and he has long veins extending past his head. He also has a long segmented tail, which is cylindrical at the end.

Bornnam: Bornnam has an asymmetrical head that is split in the middle, appearing with two completely different faces. The left half of his face looks toward the left instead of facing straight. It has a flattened nose and a webbed design on the top with small veins sticking out. The face on its right side is vertically longer and appears to have a metallic surface, resembling a mask. It faces forward and looks more humanoid, having a drooping eye, a nose, and a crease above its mouth resembling a mustache. The mouth on this face does not move when Bornnam speaks. This face has a cable connecting it to his shoulder pad, whereas his other shoulder has a cable connecting to his back. Bornnam is the largest zombie compared to the other three.

Little is known of their personalities since they are instantly killed by Straizo. However, they are all violent and cruel creatures excited to kill humans.

In the anime, they are given a short additional scene where they ask for Dio's orders before attacking Jonathan, showing that they are subservient and don't impulsively attack without getting orders beforehand.[3]

All four zombies share the same ability, allowing them to extend veins from the tops of their heads in the direction of their prey in order to suck their blood. If used in a careless manner, these appendages could become entangled.

The four zombies approach Poco and his sister, but before they could dispose of the two, they are confronted by Straizo. The four then reveal their names and try to dispose of the Ripple user by attacking with their blood-sucking needles. Straizo jumps into the air and kicks a hanging chandelier causing it to fall. After the chandelier traps the four zombies, Straizo then strikes the iron part of the chandelier with the Ripple, melting the zombies, thus leading to their deaths.[4]