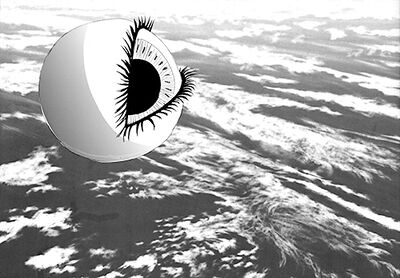 The Eyed Balloon (アイドバルーン, Aido Barūn)[1] is a phenomenon in space, featured in the light novel JORGE JOESTAR.

NASA astronauts initially believe that it is the third moon of Mars until they later discover that it is a living entity composed of 36 versions of Kars.

The Eyed Balloon is a sphere that is five kilometers in length and has a closable giant eyeball in the center. Below its eyeball is a slit with rows of jagged teeth. It can create long tentacles which stretch to outer space. Unlike Mars's other two moons, it is smooth like a mirror with no craters and is made of rock. Its interior has thirty-six Giotto probes floating around it.

It is only eight kilometers above the surface of Mars, meaning that it is within Mars's atmosphere.[2]

Captain Funnier Valentine and his team of astronauts on the H.G. Wells spaceship report to Houston about their discovery of Mars's third moon, and whether there may be any connection to Morioh and Nero Nero Island detaching themselves into separate islands back on Earth. Jorge looks out the window and notices that the third moon looked nothing like the other two moons. It is also staying put inside the atmosphere of Mars.

Goyathlay Soundman tries investigating it with his sand. They follow the path of Soundman's sand and see a black string wrapped around the mass of sand, pulling it towards the small new moon. Houston tells them to temporarily pull away from Mars and shows an image on their screen, which they discovered while examining the string towing the sand. The string branches into countless other threads, appearing like a plant or bacteria. The moon has a large quantity of "tentacles" surrounding it, and it would have grabbed onto the spaceship too had they gotten closer.

Houston then transmits another shot displaying a long-haired half-naked man with horns on his head. He had some sort of rope in his hand connecting to the third moon. He had kept the moon hidden behind Mars the whole time by running with it like it was a balloon, meaning he was running at superhuman speeds. Soundman's sand reaches the moon and Narancia Ghirga uses his Stand's periscope, questioning whether moons are alive. After Pocoloco Tripleseven suddenly screams, they all see that the "moon" is actually a giant eyeball and its lid just opened. Its tentacles grab the spaceship but Narancia tries firing at it with dozens of submarines. The "moon" then opens its mouth and swallows up all of the submarines.

President The Funniest Valentine appears on the loudspeaker and informs them that he is presently at the UN Headquarters in New York, attending an emergency meeting regarding the mysterious life form which they are calling The Eyed Balloon. The Funniest shows the astronauts seven images of The Eyed Balloon's interior, highlighting the Giotto probe floating in the back. The Funniest then gives them an ultimatum to escape The Eyed Balloon's tentacles in ten minutes or they will detonate the H.G. Wells spaceship remotely to prevent the horned-man Kars from returning to Earth.

Kars decides to build his own spaceship using The Eyed Balloon and the Giotto probes. He reveals that The Eyed Balloon was composed of 36 different Kars from each universe, each holding a Giotto probe within the sphere. The universe had already looped 36 times and in each iteration, Kars was defeated by Joseph Joestar and flung into space due to fate, where he met himself. Each Kars work together, assembling a futuristic spaceship using their own body parts and the parts from the Giotto probes. The remaining Kars melt themselves into fuel for the ship.[2]

Eventually when they crash into Earth, The Eyed Balloon spaceship burns upon reentry.[3]