Iggy the Fool and N'Doul the GEB (Pt. I) 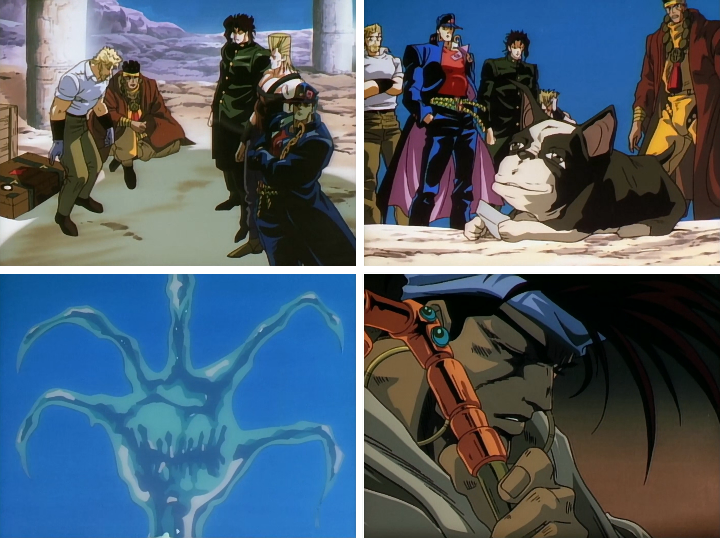 Iggy the Fool and N'Doul the GEB (Pt. I) (「愚者」のイギーと「ゲブ神」のンドゥール -前編-ゥール -前編-, "Za Fūru" no Igī to "Gebu-shin" no Ndūru -Zenpen-) is the eighth episode of the JoJo's Bizarre Adventure OVA. It adapts Chapter 183 through Chapter 186 of the Stardust Crusaders manga.

The episode starts in a flashback where an Aztec ritual is being held. The tribe mates mount a young woman on a sacrificial altar. After she is set on the altar the chieftain, wearing a Stone Mask, uses a dagger to decapitate her. Her blood is collected, and the chief splatters the blood onto his mask, which activates and pierces his brain, turning him into a vampire.

Jotaro and his companions finally reach Egypt. In the desert, the group meets with a helicopter from the Speedwagon Foundation and the pilot deliver some supplies and a mysterious new ally, the User of The Fool.

Said "ally" is revealed to be a dog named Iggy who immediately antagonizes Polnareff. When Iggy farts on Polnareff, Polnareff summons Silver Chariot but Iggy summons the Fool, which is made of sand and easily overpowers Chariot. Thankfully Iggy is then distracted by a pack of chewing gum. Meanwhile, another one of DIO's assassins is listening to the group. Afer the delivery, Joseph inquires about Holy only to learn that she's in a critical state.

Meanwhile, the blind Stand User N'Doul chooses his hiding spot and, listens to the noise of the group's truck. The heroes spot smoke rising on the horizon, and find the helicopter crashed in the desert. Shockingly, they find a pilot with his mouth and lungs full of water. They then find the second pilot and in attempt to help him, give him a gourd of water. However, the water suddenly comes from the flask and rips out the pilot's head. The group realize that the enemy Stand is a water Stand.

Getting away from the flask, the group try to find the User but Jotaro cannot find him in the open desert. The Stand suddenly comes under the sand and slashes Kakyoin's eyes, taking him out. It almost attacks Polnareff but is distracted by the pilot's watch which suddenly rings. The heroes understand that the attacker is using sound to detect the enemy. Polnareff must lift Kakyoin to run to the truck, but the rest of the group manage to catch him. The heroes flee, still followed by the enemy Stand.

The group give Kakyoin first aid and Jotaro then notices Iggy jumping off the truck. In truth, the dog could sense the enemy Stand coming. Suddenly, Polnareff is attacked by Geb in a glove. Using the water from a can, Geb then attempts to drown Polnareff. It is impervious to Silver Chariot and Star Platinum but is repelled by Magician's Red's flames. Then it infiltrates the cooling system of the truck and destroys the vehicle, immobilizing the group. The heroes are stranded on the desert but Jotaro is determined to pull through. 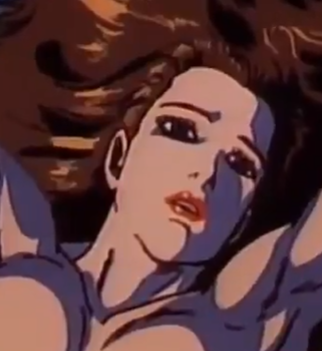 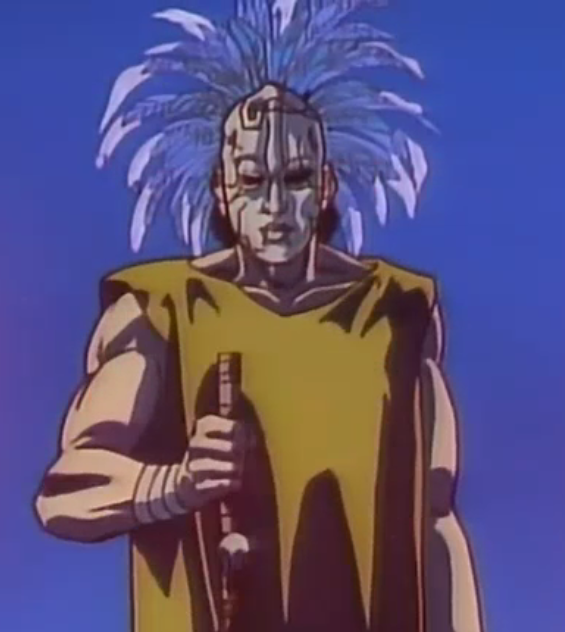