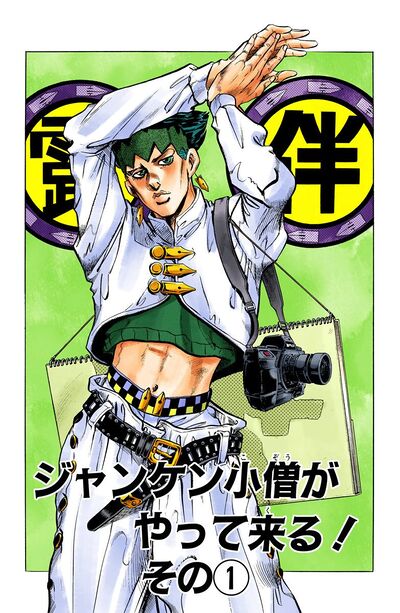 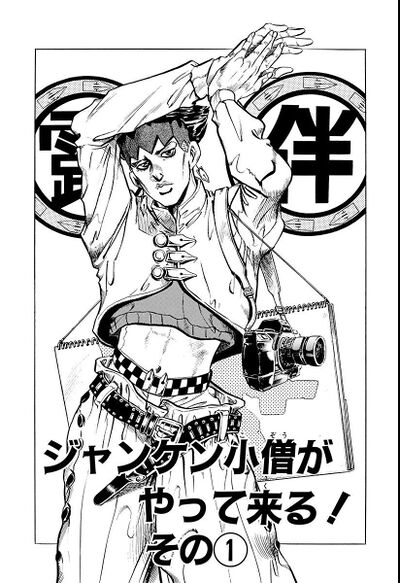 Yoshihiro reminisces what Enya the Hag once told him: whoever is chosen by the Arrow will become Stand users allied to him. Not familiar with its mechanisms, Yoshihiro lets the Arrow choose a worthy individual, which happens to be a young boy climbing on a pole. At Morioh Station, Rohan takes a photograph of every man passing by, inadvertently meeting Joseph and Shizuka. The two have a small chat, with Joseph asking if Pink Dark Boy has an English translation, which Rohan refutes. Being asked what he is doing, Rohan explained that Kira is likely living the life of whoever he is impersonating. Narrowing the search to those with a corresponding body type, he has a list of 48 suspects he plans to interrogate one by one with Heaven's Door. Suddenly a young boy asks Rohan if he wants to play rock paper scissors. Rohan first ignores him, greeting Joseph goodbye, but the kid follows him, insisting on playing rock paper scissors. Rohan notices a strange hole on the boy's cheek and tries to leave on a taxi, disturbed. When the boy cuts in line and takes the taxi, Rohan is angry, but the boy simply challenges him to a game of rock paper scissors to see who gets the taxi.