Dio Brando, Enrico Pucci, Vanilla Ice
SPOILER WARNING: Part 1-6 Spoiler details may follow.
“
There are those rare men who have not a strap of good in them... the evil elite! Like me... and like you... So how about it? Will you become my servant?
”
—Dio Brando, Chapter 18: Jack the Ripper and Zeppeli the Strange, Part 1

The Agents of DIO (の手下, DIO no Teshita)[1][TL Note 1] are the primary antagonistic force in the original universe of JoJo's Bizarre Adventure, with its members appearing in Phantom Blood, Battle Tendency, Stardust Crusaders, Diamond is Unbreakable and Stone Ocean. 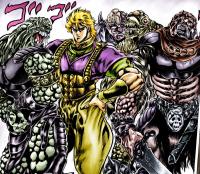 Although Dio supposedly died after the events of Phantom Blood and his followers were thought to be killed by Jonathan Joestar and his allies, there were some minions that survived, including a bloodsucking zombie, which disguises itself as a major squad leader in the Royal Air Force

. He is later killed by Lisa Lisa as revenge for George Joestar II's murder.

Nearly a hundred years later in 1983, DIO resurfaces when his coffin is pulled out of the ocean's depths by a group of treasure hunters. He obtains a Stand from Enya the Hag when Diavolo sells his five Arrows to Enya. With Enya as his adviser, DIO forms a new group, mainly consisting of human Stand users and only a few Vampires. In secret, he befriends a priest named Enrico Pucci and unknowingly impregnates four women with his children. He recruits members from all around the world who are primarily mercenaries, and manipulates many of them with large sums of money like Hol Horse. For more hesitant or untrustworthy followers, such as Noriaki Kakyoin and Jean Pierre Polnareff, DIO uses flesh buds to enthrall them. However, even Enya had a spore secretly implanted in her brain.

Around 12 years after Polnareff is freed from DIO's brainwashing and leaves the organization, he becomes an ally of DIO's son, Giorno Giovanna. During the fight against Diavolo, Polnareff is killed just as his Stand goes out of control. However, due to his Stand's new ability, Polnareff's soul is swapped with a turtle's and he remains living despite his original body dying.

The final remaining servants of DIO's group are Enrico Pucci and Johngalli A. with the goal of avenging DIO by killing Jotaro Kujo and his daughter, Jolyne Cujoh. Pucci desires to continue DIO's dream of finding Heaven and recruits DIO's sons (except Giorno) as well as the prison staff and inmates to help him defeat the Joestar Group.

Pucci does succeed in killing the Joestars and their allies, and almost manages to create a world where everyone will see their Fate just as DIO wanted. However, Emporio kills him before he is able to do so, making the world free of DIO's influence. In the alternate universe, the deceased Joestars and their friends are reborn as alternative counterparts, with different lives and memories.

Like the previous incarnation of the group, while some of its members are confirmed deceased, the fates of other members are left ambiguous, including the fate of Dio's sons, Ungalo and Rikiel. 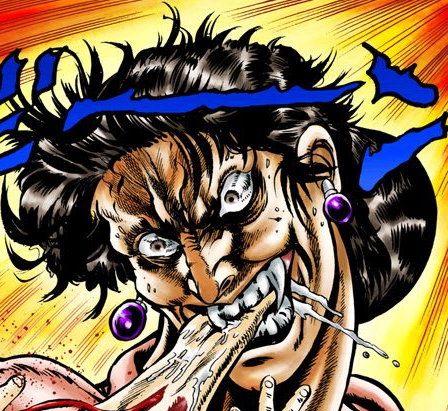 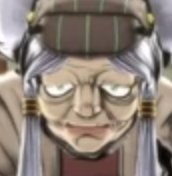 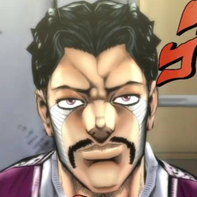