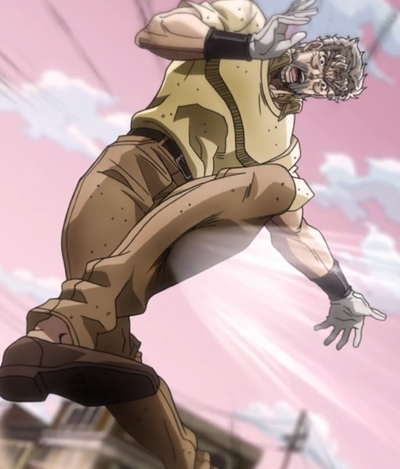 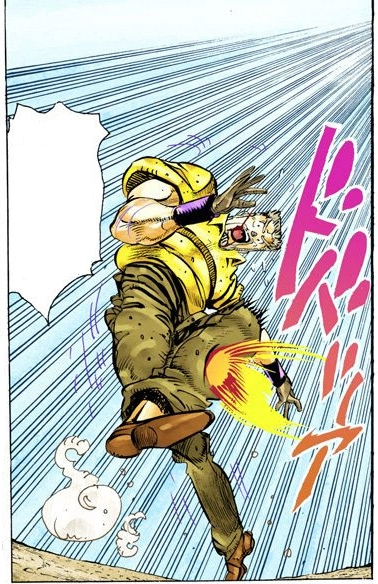 It narrates the predicament of the Joestar Group in Karachi where Steely Dan takes Joseph hostage with his weak but elusive Lovers, forcing Polnareff and Kakyoin to have their Stands fight it inside Joseph's brain while Jotaro is coerced into becoming Steely Dan's servant.

The town disappears and the zombies die a second time around the Joestar Group, as it was an illusion created by Justice. They decide to bring the unconscious Enya with them for Joseph to read her mind to gain information on DIO. Hol Horse appears and suggests that they kill her instead, before stealing their Jeep.

The group arrives in Karachi, Pakistan, where Joseph bargains with a merchant for food. Enya wakes up and recognizes the merchant. The merchant activates Enya's spore, killing her. He reveals himself as Steely Dan, a Stand user and ally of DIO.[1]  Polnareff attempts to save Enya by slicing the spore's tentacles, but it's too late. Steely Dan tells the group that they can't touch him, but is interrupted by an attack from Jotaro. Steely Dan is affected by the attack, but Joseph is somehow injured at the same time. Steely Dan bribes a child to hit him with a broomstick, which injures Joseph as well. Steely Dan reveals that his Stand, Lovers, has entered Joseph's brain, making him feel pain every time Dan is injured. Jotaro is forced to obey Steely Dan, or Joseph will be killed.[2]

Polnareff and Kakyoin shrink down their Stands to fight Lovers within Joseph's brain, and Steely Dan is eventually forced to remove his Stand.[3] He cowers before Jotaro to buy time and tries to take over Jotaro's brain. Jotaro uses Star Platinum to stop Lovers and crushes Dan's arm and leg. He releases a barrage of punches, and Steely Dan is thrown into the wall of a building, rendering him unable to pursue the Joestar Group further.[4]