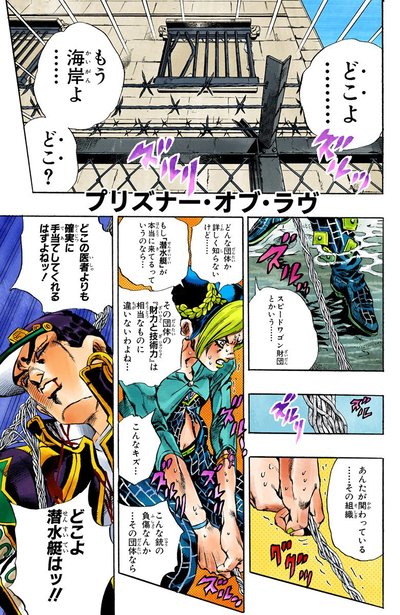 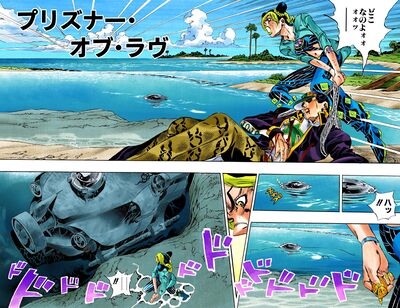 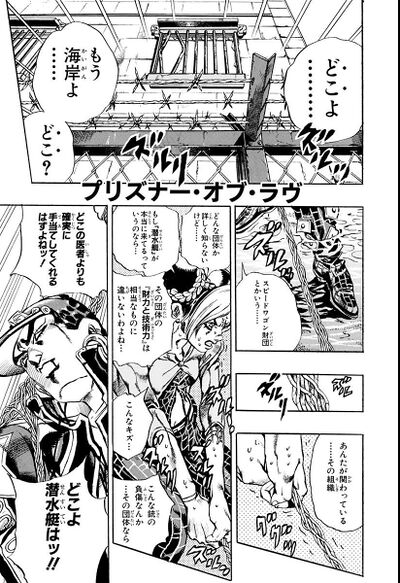 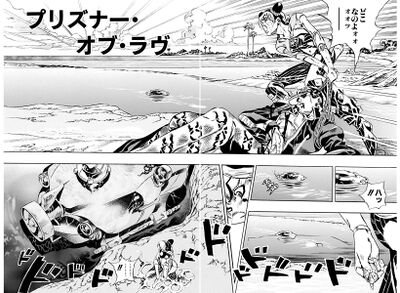 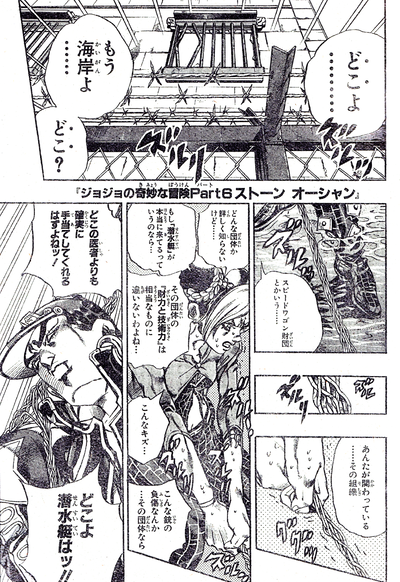 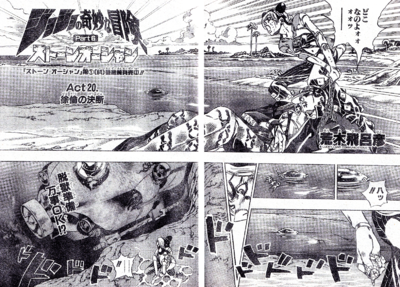 SO Episode 5
Prisoner of Love (プリズナー・オブ・ラヴ, Purizunā obu Ravu), originally Jolyne's Decision (徐倫の決断, Jorīn no Ketsudan) in the WSJ release, is the twentieth chapter of Stone Ocean and the six hundred fourteenth chapter of the JoJo's Bizarre Adventure manga.

Jolyne stands on the beach with her incapacitated father, looking for the UUV sent by the Speedwagon Foundation. As she expresses her frustration at not finding it, the UUV rises from the depths. She looks back to see Jotaro's body limply submerged and desperately pulls him out of the water. She is unsure as to why he's so weak, as the bullet wounds aren't deep enough to incapacitate him. Jolyne realizes that her father's heart has stopped and she tries to resuscitate him. As she does this, guard dogs find her and alert the guards to her presence.

The guards run to the fence, but Jolyne gets behind them, using her string to disarm the guards. She puts her hands up, and, seeing her surrender, the guards decide to spare her. Using a string, she communicates with Emporio, who is in the prison by a window. Emporio questions why she didn't run away. He tells her Jotaro is in a death-like state because Whitesnake used its ability to steal his Stand. Jolyne explains that Whitesnake didn't escape, but went deeper into the prison. She believes she has to get her father's Stand back in order to save his life. Emporio states that the bone he gave her was his mother's, who was killed by Whitesnake.

Jolyne believes Jotaro is still barely alive and that she can save him. She puts him in the UUV and sends him to the SPW Foundation. Jolyne and Emporio team up to defeat Whitesnake and save Jotaro. Inside the prison, Johngalli A. sits and rests, recovering from his battle. He and Whitesnake gloat over successfully taking Jotaro's discs, but since Johngalli A. knows of Whitesnake's Stand user, Whitesnake shoots the sniper in the neck to silence him.