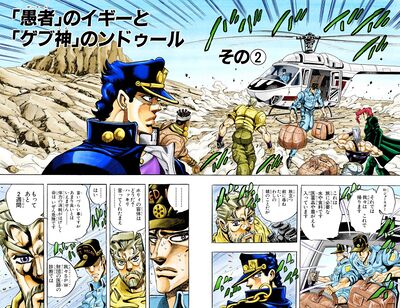 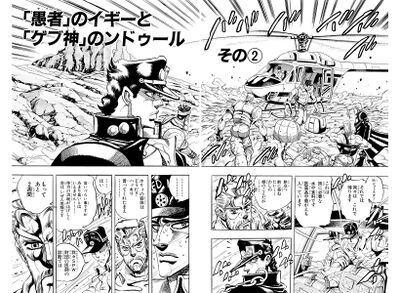 "The Fool" Iggy and "Geb" N'Doul, Part 2 (「」のイギーと「ゲブ神」のンドゥール その②, 'Za Fūru' no Igī to 'Gebu-shin' no Ndūru Sono 2), originally Fear the Water! (水が怖い！, Mizu ga Kowai!) in the WSJ release, is the seventy-first chapter of Stardust Crusaders and the one hundred eighty-fourth chapter of the JoJo's Bizarre Adventure manga.

The Speedwagon employees drop off some supplies for the group before they depart. Joseph asks them how his daughter is holding up, with which they, unfortunately, reply that her condition is getting worse. The Joestar group now has only two weeks to defeat DIO before Holy dies. The Speedwagon employees report that nine people were spotted entering and exiting the mansion DIO is suspected to be hiding in, and that these mysterious men and women were thought to be Stand users. After that the helicopter departs and the group continues their journey. In the distance, a blind man tries to catch a fly with his hand. After failing he hits a rock with his cane and kills the fly.

The group drives through the desert in a dune buggy, but stop suddenly when they notice the Speedwagon Foundation's helicopter crashed into the desert. As they approach they notice the pilot lying outside the copter with his mouth full of water. Jotaro pours the water out and notices that the man died from drowning. The group finds the co-pilot, still alive but all dried up as if water was drained out of him. The co-pilot says water, causing the group to believe he is dehydrated and gives him a canteen. He exclaims however that the water is what attacked them. As he does this, the water from the canteen rushes out in the form of a hand and pulls his entire head into the canteen.