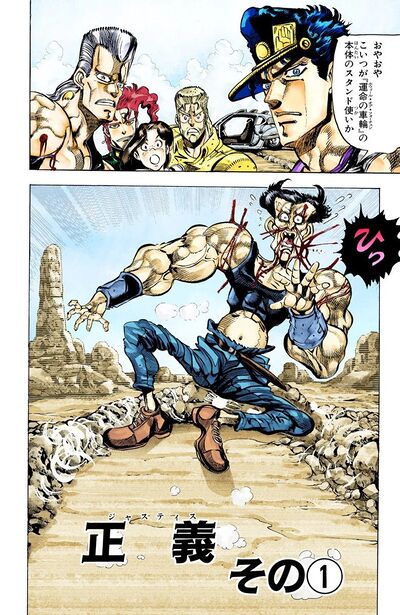 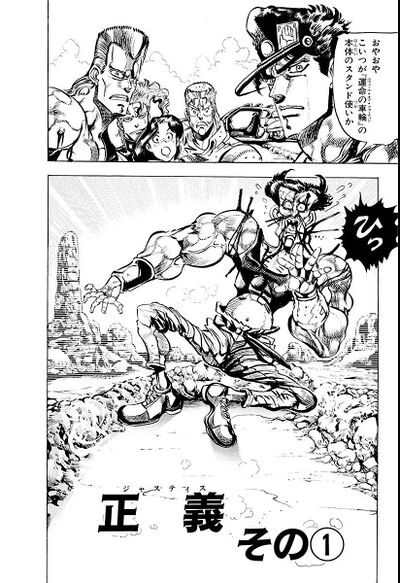 Justice, Part 1 ( その①, Jasutisu Sono 1), originally The Fog-Ridden Town! (霧の中の町！, Kiri no Naka no Machi!) in the WSJ release, is the forty-first chapter of Stardust Crusaders and the one hundred fifty-fourth chapter of the JoJo's Bizarre Adventure manga.

ZZ's appearance is revealed: He is a puny man with muscular arms. He begs for forgiveness, but is only ridiculed by the Joestar group, who chain him to a rock with a sign that reads "don't disturb me, I'm training." To keep him from ambushing them again, they take his passport and car. Anne begs to come along with them, but they decide she is going back to Hong Kong on the first flight no matter what she says.

Meanwhile, Enya laments that every one of the seven Stand users she sent just embarrassed themselves and DIO. Now that everyone has failed to avenge her son, Enya decides she herself will deal with the Joestar group with her Stand, Justice.

On their trip, Jotaro manages to find a tailor that will make a new school uniform for him, as ZZ had burned his first one, while Polnareff wonders if this time he will manage to find a clean bathroom. The fog gets thicker as they travel, so Joseph decides it is best to spend the night at a nearby town. On the way, Jotaro sees a dog's corpse impaled on a stake close to the town. However, he does not mention it to the group.

Arriving in the town, the group asks a restaurant owner if there is a hotel, but the man immediately closes the restaurant and tells them he doesn't know. As with Jotaro and the dog, Joseph is the only one to notice cockroaches swarming on the man's neck. Polnareff tries to get information from a man sitting nearby, but is surprised when he notices the man is actually dead.

(Mentioned only)
Devo the Cursed