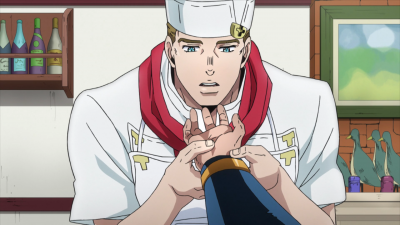 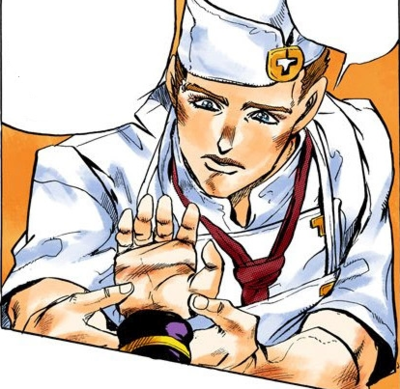 As Josuke and Okuyasu walk home from school, Okuyasu notices a sign leading to a new Italian restaurant by the name of Trussardi's and enter, being greeted by the sole owner, chef and waiter of Trussardi, Tonio Trussardi. Tonio states that he will determine what he makes for the customer based on his observations and accurately points out Okuyasu's health problems.

Tonio then prepares a number of dishes for Okuyasu one after another, including: mozarella and tomato salad and spaghetti alla puttanesca. After eating these seemingly normal meals, Okuyasu began to experience bizarre reactions, such as his skin flaking off in huge amounts and his teeth shooting out, which in turn healed his stiff shoulder and cavities respectively.[1] 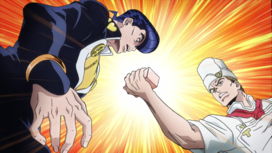 Tonio asking Josuke to use soap

After Tonio leaves to make the main dish, Josuke, out of suspicion towards Tonio and his cooking, decides to inspect the food by using Crazy Diamond to 'fix' the spaghetti and reduce it to its original ingredients. As the spaghetti begins to restore itself, bizarre looking organisms appear. Josuke deduces that Tonio is in fact a Stand user.

Josuke goes into the kitchen of Trussardi's to fully investigate Tonio and discover his true intentions. Tonio discovers that Josuke is spying on him and proceeds to throw a knife at Josuke which barely misses. Josuke questions Tonio's motives behind his cooking and prepares for a fight. However Tonio, unexpectedly to Josuke, presents him with a block of soap and asks him to wash his hands with it.

Tonio is revealed to be angry towards Josuke for not washing his hands before entering the kitchen. Tonio explains he has no ulterior motives behind his cooking besides wanting to spread joy through his food. Tonio decides to punish Josuke for entering his kitchen without washing his hands first. As he serves Okuyasu pudding for his dessert to cure his athlete's foot, Josuke, unfortunately is left to clean the kitchen without a bite to eat.[2]