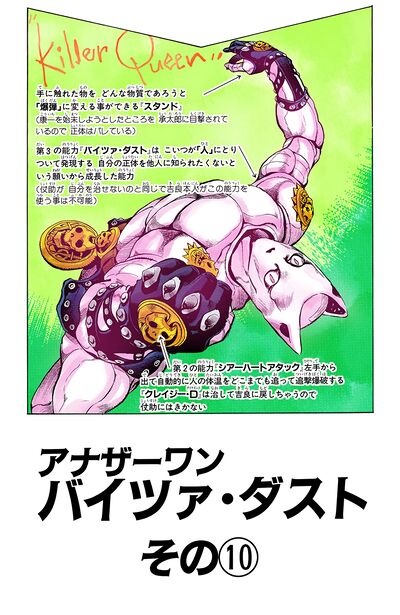 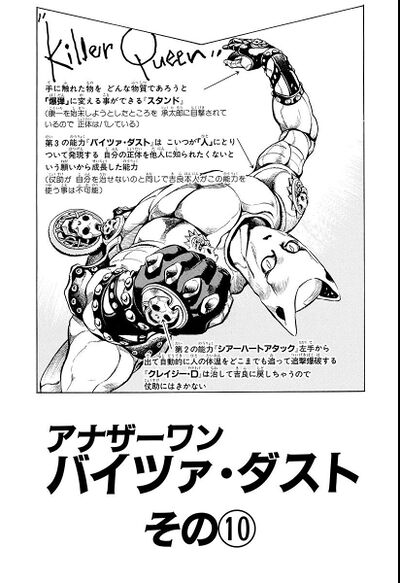 Another One Bites the Dust, Part 10 (アナザーワン バイツァ・ダスト その⑩, Anazāwan Baitsa Dasuto Sono 10), originally The Air Breathed Fire! (空気が火を吹いた！, Kūki ga Hi o Fuita!) in the WSJ release, is the one hundred sixty-second chapter of Diamond is Unbreakable and the four hundred twenty-seventh chapter of the JoJo's Bizarre Adventure manga.

As Crazy Diamond attacks Killer Queen, Okuyasu exclaims that Kira was in front of them the whole time, under the guise of Kosaku Kawajiri. Josuke then says that it has to be more than a coincidence that this happened and that Hayato must have done something, as Josuke was oblivious to the effects of Bites the Dust. Kira then proclaims that he switched identities with Kosaku not because he was fleeing from Josuke and the others, but because he wanted to enjoy a quiet life again. He then goes on to say that he could have killed them all at any given time but didn't, simply because he doesn't have a taste for battle. As this goes on, Rohan, Jotaro, and Koichi look on from a distance.