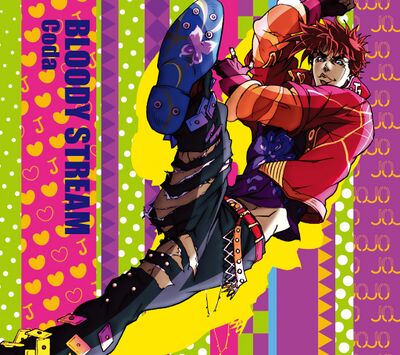 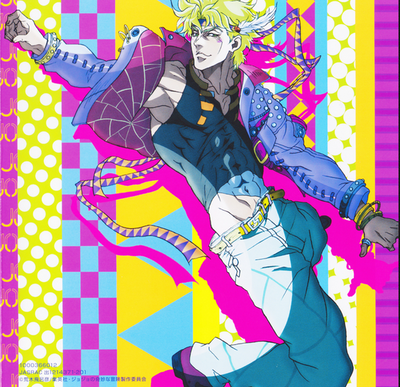 Anime Episodes Episode 11 - Episode 26
"BLOODY STREAM" is the second opening theme song of the JoJo's Bizarre Adventure Anime, animated by Studio Kamikaze Douga. The song is associated with the second arc of the series, Battle Tendency and was a single by Japanese musician Kazuso Oda under the stage name "Coda".

The song is noted as having an emotional and fashionable tune, with the husky yet charming voice of the song's vocalist adding a further stylish nature to the song as a whole.[2] Jun Yamamoto of Billboard said that he felt that the horns and funky sound of the song compliment the story of Joseph Joestar and his battle against the Pillar Men Esidisi, Wamuu, and Kars, further mesmerizing him and drawing him into a "bizarre world".[3]

The opening starts off with a quick montage of Joseph suiting up, eventually leading up to the Title emerging from a rock. After this, the title quickly fades away as a silhouette appears of Joseph doing various poses with thorns and various colors flying around in the background. The camera zooms out and silhouettes of the three Pillar Men standing in front of a background of red fire are seen. The scene then changes into showing all three Pillar Men frozen in stone. 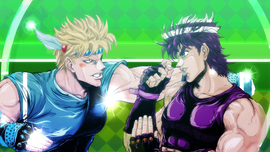 A second montage begins showing various colored characters from the manga, including Erina Joestar, Lisa Lisa, and Smokey Brown. Between the transition of Lisa Lisa and Smokey, an X-Ray can be seen showing the skeleton of Joseph with his throat and heart areas glowing, showing where the poison rings were placed by Wamuu and Esidisi. Another silhouette performance commences, only this one is of Lisa Lisa, and it eventually shifts to Caesar, unleashing multiple kicks and performing a high jump with only his knees. After Caesar's performance, Joseph's and Caesar's silhouettes are seen fighting up until Joseph blocks Caesar's punch and they become fully visible for a brief instant, showing that they are only playfully sparring. Another silhouette of Joseph is shown again using his Clackers, but he eventually gets tangled in them and falls down. A naked Lisa Lisa is seen spinning in the air with rose petals about. After which, the screen becomes black and the Red Stone of Aja slowly falls into place like a pendulum. Multiple blue hands attempt to grab it, with a couple dying off as the stone pulls away from them. Another montage occurs showing Speedwagon, Straizo, Suzi Q crying, Loggins and Messina, Stroheim doing a Nazi salute and Santana frozen in stone.

After this, the three other Pillar Men are shown attacking. Wamuu unleashes a Divine Sandstorm, Esidisi uses his flame mode while flailing his blood vessels, and Kars slices the camera's eyes out with one of his Light Blades. The camera zooms out showing the Pillar Men standing on a rocky pillar in front of a full moon. Joseph and Caesar are facing them and prepare to battle. After a brief shot of the Stone of Aja, Kars as the Ultimate Thing is seen with the sun shining behind him.

The scene switches to a rotation of Caesar and Joseph showing off fighting moves as the title 'JOJO'S BIZARRE ADVENTURE PART2' scrolls by in the background. After a few rotations, Joseph spin kicks out of the frame and Caesar drops his arms and makes a disdainful scream, with a distinct red bubble (referring to the battle between Caesar and Wamuu) flying past to the screen. The scene transitions to Joseph donning Caesar's Headband and yelling into the sky as a shooting star flies across the night. The opening ends with the Red Stone of Aja embedded in stone and glistening.

The opening for episode 25 follows the trend set by the previous opening of containing a few sound effects.

Other languages:
English • português do Brasil
Retrieved from "http://jojowiki.com/index.php?title=BLOODY_STREAM&oldid=804672"
Categories: