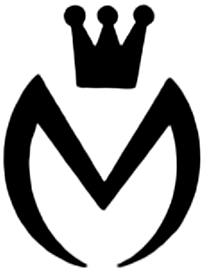 Morioh (杜王町, Moriō-chō) is a fictional town located within Japan's S City, M (Momoji) Prefecture,[1] and the setting of the majority of the eighth part of the JoJo's Bizarre Adventure series, JoJolion. 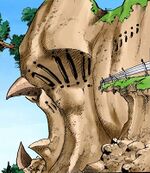 During the Soft & Wet story arc, the condo is booby-trapped by Ojiro Sasame. When Yasuho Hirose and Josuke Higashikata enter the condo, they are stuck in the middle of the multiple traps Ojiro has placed to injure their limbs.

Yasuho Hirose's home. A modest underground apartment in which Yasuho lives with her mother Suzuyo Hirose. Although you have to climb a small set of stairs to go to the front door, entering leads immediately to a platform from which one has to descend to reach the living room. Yasuho has her own room in this apartment.

Manga Debut: JJL Chapter 12: "Paisley Park" and "Born This Way", Part 1
One of Morioh's residential area, full of houses. Josuke Higashikata has to cross it to go to TG University Hospital while being pursued by Born This Way.
Hasekura High School

Manga Debut: JJL Chapter 18: "Shakedown Road", Part 1 (Mentioned only)
Namesake: Hasekura Tsunenaga (Retainer of Date Masemune)
The high school Josuke and Joshu try to go to get the former academically evaluated. It is located at the end of Shakedown Road, but is ultimately never actually seen. Joshu does not go to this school, instead attending a different one in S City, but knows several people who do and whom he claims are all good people.

It is presumably named for Hasekura Tsunenaga, a historical figure who was a retainer to Date Masemune, the founder of Morioh in-universe and Sendai in real life.

Manga Debut: JJL Chapter 42: Doobie Wah, Part 4
A small octogonal tuscan-style house situated at the top of a hill. It once belonged to Aisho Dainenjiyama. However, his girlfriend stole the deed of the house and sold it. The house was demolished while Aisho was hibernating inside and Aisho almost died in the process.
Morioh Harbor

Morioh's harbor. Contains an industrial area. It is also used as a port for private boats, and Tamaki Damo attacks Yoshikage Kira and Josefumi Kujo there. It is partially wrecked when Killer Queen makes a bomb explode there. 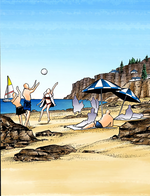 Manga Debut: JJL Chapter 50: Vitamin C and Killer Queen, Part 1
A pleasure beach situated near Morioh. One day, as Kiyomi Kujo and her young son Josefumi Kujo were having fun at the beach, Josefumi fell in the water and got trapped between rocks, hitting his head and nearly drowning as a result.
Stone Ocean 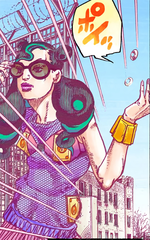 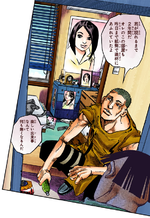 Manga Debut: JJL Chapter 62: Dolomite's Blue Lagoon, Part 4 (Mentioned only)
A school situated in Morioh. It is mentioned as part of an incident in which 15 of the school's rabbits have been devoured by an unknown "man" between the 4th of December 2007 and the 25th of January 2008. Masaji Dorokoma was the prime suspect due to the dental imprint on the corpses, but the police was unable to find him.
Mount Hananero 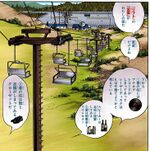 Manga Debut: JJL Chapter 65: The Plant Appraiser - Rai Mamezuku (31), Part 1
A ski lift on a mountainside serving as Rai Mamezuku's summer home. Firstly, the mountainside is Rai's orchard, where he cultivates various plants (for example, strawberries). Rai has organized his orchard to keep the pests within a controllable area with bait plants, safeguarding the rest of his terrain. The second pole is a library and winery. The third pole is a closet where Rai keeps his clothing and shoes. The fifth pole contains the kitchen. A water tank sits on the sixth pole, which also houses a bidet (with a curtain for shy guests). The seventh pole contains a gas tank.
Kotodai Park

Manga Debut: JJL Chapter 71: The Qing Dynasty Hair Clip
A park which was host to a large outdoor flea market. It was here that Yasuho purchased the Hair Clip.

It shares its name with a real park in Sendai.

Manga Debut: JJL Chapter 72: North of the Higashikata House. The Orchard (Mentioned only)
An Italian restaurant operating in Morioh. It is never seen, but Jobin Higashikata complains about being unable to book a table at them. They having dealings with the Higashikata Fruit Company.
Maako Kitani's Apartment

Manga Debut: JJL Chapter 86: The Wonder of You, Part 3
Maako Kitani's home, a luxurious two-storied apartment situated at the top of a condominium, with modern architecture and a spacious balcony with a jacuzzi. She lives here with her daughter and Ojiro Sasame.
Hasekura Academy Elementary School

Manga Debut: JJL Chapter 109: The Radio Gaga Incident (1941)
A mysterious part of a road curving along the slope of a hill, with a guard rail installed there to prevent falls. It is the site of the "Radio Gaga Incident", an incident involving a woman who was inexplicably drawn to the guard rail, began to undress herself and mumbling "gaga" repeatedly, who then suddenly disappeared as a truck came by. Lucy Steel discovers that the guard rail is a living creature which is responsible for the disappearances.
Morioh's Shops and Businesses 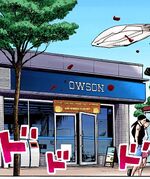 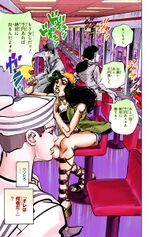 Manga Debut: JJL Chapter 44: Love Love Deluxe, Part 2
A café where Josuke Higashikata and Karera Sakunami briefly visit. Karera actually had a kind of appointment there where she was supposed to make hair grow on a bald man's head. Karera causes a scene there, forcing the staff to ask her to leave.
Ramen Restaurant

Manga Debut: JJL Chapter 56: Milagro Man, Part 1
A hostess bar which Joshu Higashikata visits when he becomes rich. Like any establishment of its kind, it provides female company for its clients and serves extravagant drinks such as champagne with golden flakes in the beverage. The manager of the bar notices Joshu and realises that he's using the Milagro Man's money, so he tries to throw him out.
High-class Restaurant

Manga Debut: JJL Chapter 56: Milagro Man, Part 1
A movie theater which Joshu Higashikata visits when he becomes rich. He goes there to see a pirate movie starring Johnny Depp in 3D, and wins a figure of Depp's character.
Shoe Shop 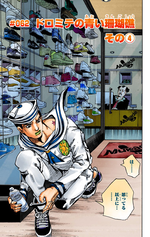 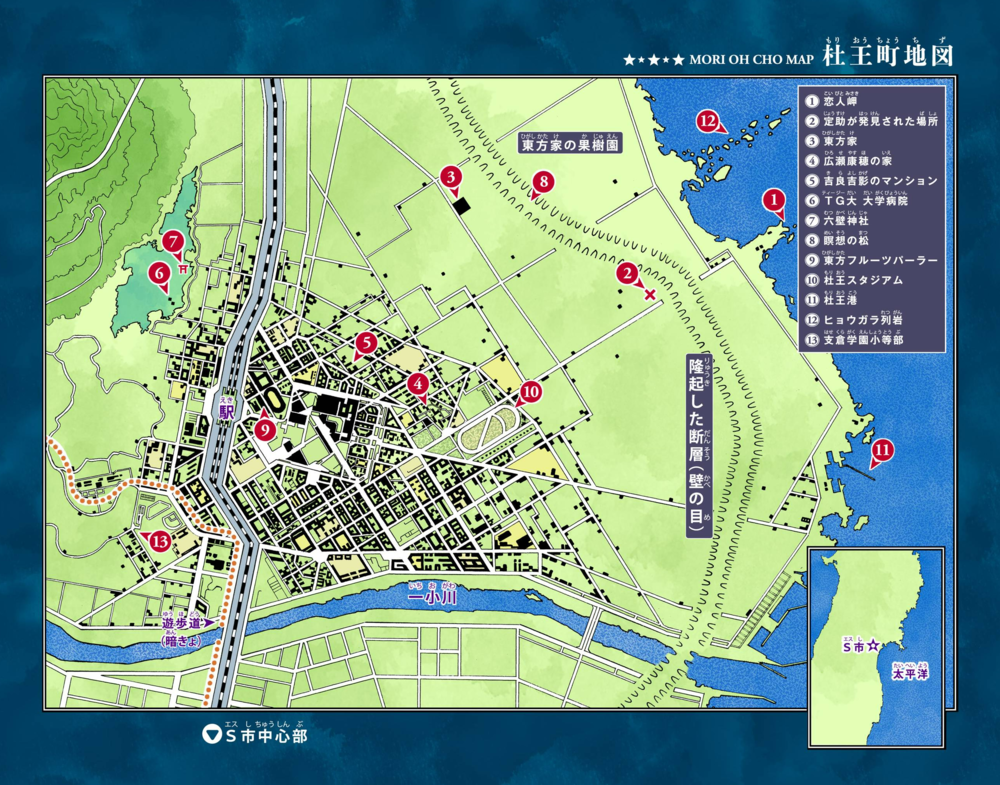 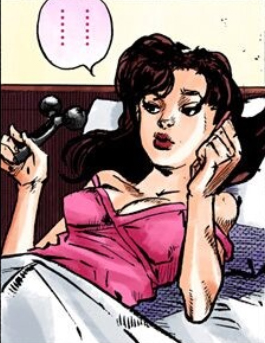 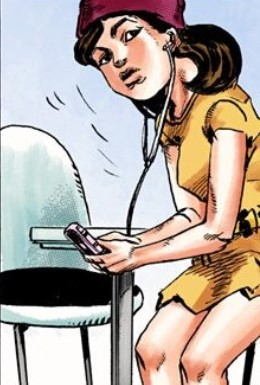