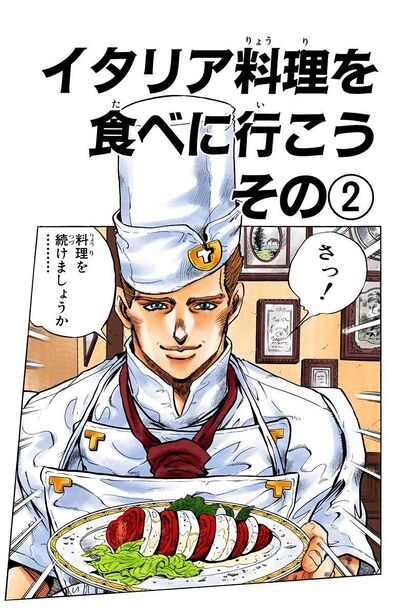 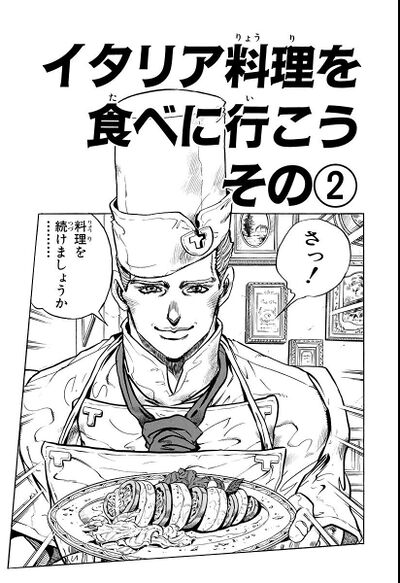 Tonio proceeds to serve his next course, which is mozzarella and tomato salad. Josuke begins to grow suspicious of Tonio as what happened to Okuyasu previously was strange, much to Tonio's displeasure. Tonio serves the salad to Okuyasu, explaining the history behind the use of tomatoes in Italian cooking, as well as his pride in his Italian heritage. Okuyasu proceeds to eat the mozzarella cheese in the salad and states that it's quite plain. Tonio explains that the cheese has to be eaten with the tomato. As soon as Okuyasu eats both the cheese and the tomato, he is shocked by its amazing taste.

Okuyasu takes another slice of the dish eagerly, which makes Josuke want to order the dish out of curiousness. Tonio mentions that the dish will only 'help' the customer with the 'stiff shoulder'. As soon as Tonio states that, Okuyasu mentions that he is burning up and starting to sweat. He begins to feel very itchy and scratches at his shoulder. While he scratches it, a sticky substance starts to come off of his skin, which Tonio explains is dirt.

According to Tonio, the salad has stimulated his thyroid gland, which, in turn, has secreted chemicals that increase his metabolism. Due to the improved metabolism in his shoulder, Okuyasu's dead skin cells are flaking off with the dirt. Tonio advises Okuyasu to continue removing the dirt. When Okuyasu finally removes all the dirt, he feels much lighter and mentions that his stiff shoulder is gone. Tonio is ready to serve the main course: spaghetti alla puttanesca.