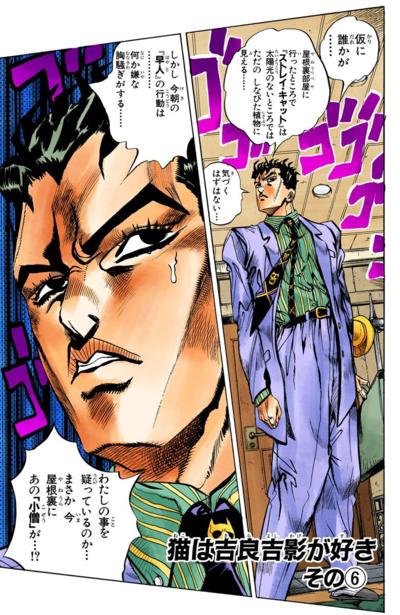 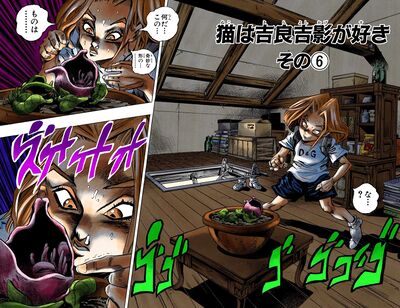 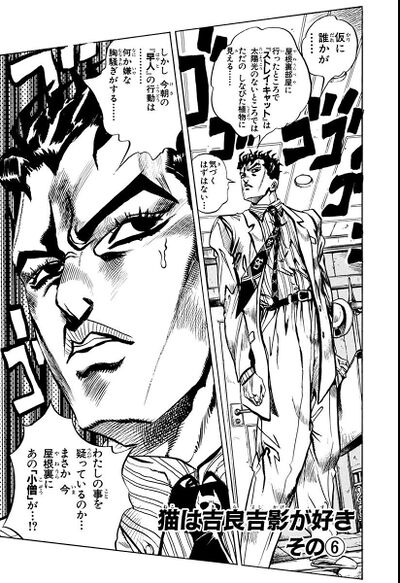 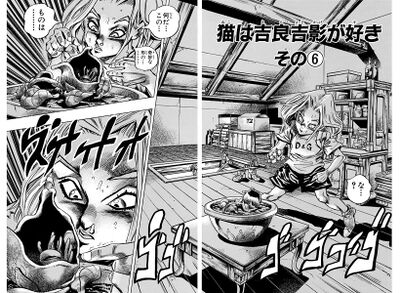 Kira is worried about the way Hayato's been acting. However, he says that Hayato won't find anything incriminating because Stray Cat sleeps when there's no light, so it would just look like a wilted flower.

Hayato pokes the mysterious plant, wondering what it is. When it has no reaction, he's disappointed that it's an ordinary plant, yet wonders why his "dad" would smuggle it up to the attic. Since it's dark, he opens the window and notices the sack of cat food in a cupboard. Just then, a ray of sunlight shines on Stray Cat and it wakes up, startling Hayato. He remarks how the plant has eyeballs and is staring at him.

Shinobu notices that Kira came back home and asks if he forgot something, offering to get it for him. Kira says he'll get it himself, and heads up to the attic as Hayato starts panicking after realizing his "dad" came back.

In a hurry, Hayato tries to shut the window. However, Stray Cat hisses and fires compressed air bubbles which morph into the shape of cuffs at his neck and wrists, to bind Hayato in mid-air. Hayato is then hit by another air bubble to his torso, which sends him flying backwards and knocks some jars over. Kira hears the noise and rushes up to the attic in a panic.

Although Hayato can't see what's binding him, he notes that it feels like a balloon and pops all the bubbles with a compass from his backpack. The air that bursts out of the popped bubbles then shuts the window, sending Stray Cat back to sleep. Quickly, Hayato grabs the cat food and pours it all over the floor to make it look like Stray Cat made a mess.

Just as Hayato planned, Kira reaches the attic and assumes that Stray Cat somehow used its power over air to grab the cat food, although he wonders how the feat was done without any light. Relieved that Hayato wasn't in the attic, Kira leaves, but not before thinking out loud that he would have to kill Hayato if the boy discovered his secret. Hayato, frightened while hiding inside a box, understands that the man definitely isn't his real dad and wonders who it could be.