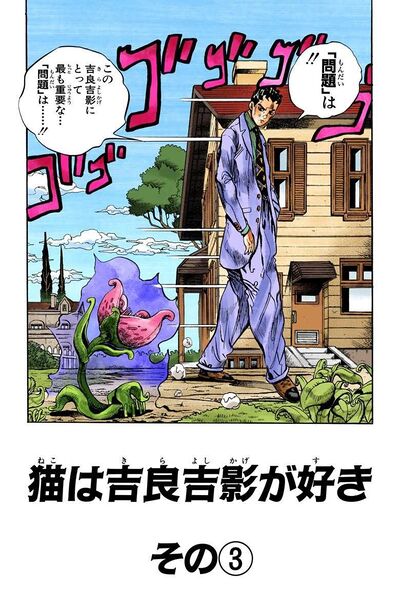 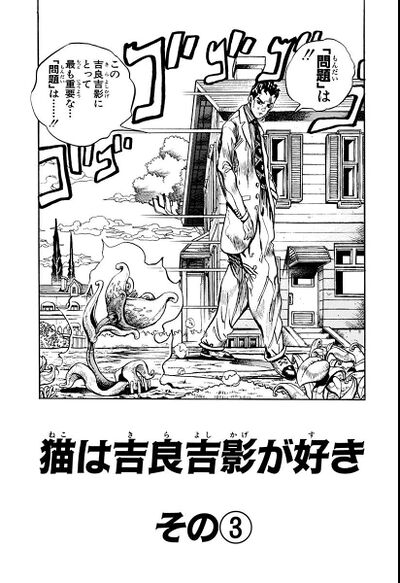 Kira ponders many questions, such as whether the creature napping in front of him is an ally or if he should kill it. He experiments by testing its behavior. He tries calling to it, lets it sniff his hand, places a cigarette in front of its nose, and pets it. Since the creature reacted like a cat in every scenario, Kira comes to the conclusion that the cat reincarnated as a Stand after it was buried, due to being struck by the arrow.

Shinobu appears behind him and asks if it's where Kira buried the cat. She dislikes the spot because it's where she lost her toenail. Kira notices the cat-plant reacting to Shinobu and realizes it attacked her because it held a grudge. His worries increase as Shinobu walks closer to him, asking him to bury the cat somewhere else. He is not worried that she will be attacked again, but worried for his own sake because if she sees the creature moving, she would surely talk about it which could bring Jotaro to investigate the rumor. As the cat-plant is about to attack again, Kira decides he has no choice but to erase it with Killer Queen.

Killer Queen places a bomb on a pebble near the cat-plant's roots and detonates its Primary Bomb. The cat-plant hisses and to Kira's surprise, the bomb does not explode. Shinobu notices the plant moving, while Kira figures out the cat-plant must be using its Stand to suppress the explosion. Kira yells for Shinobu to go back inside, but she is suddenly knocked unconscious by an impact to her chest, leaving a paw print embedded in her shirt. The cat-plant then throws away the pebble and it explodes from a distance. Kira is now even more determined to dispose of the creature.