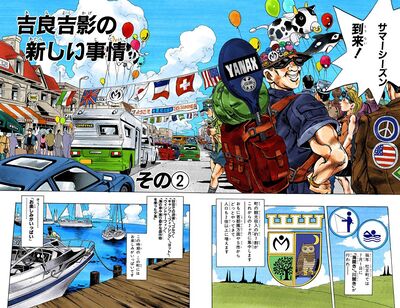 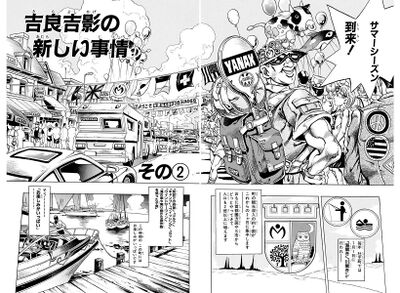 Summer has arrived and there is plenty to do in the town of Morioh. Kira continues to adjust to his new life as Kosaku Kawajiri but he faces withdrawal, having not succumbed to his true nature in a while. As he stares at girls outside of his bedroom window, he bites his nails and states his desire of choking one of them.

However, worried of Jotaro getting a lead on him if he makes any mistakes, he restrains himself and decides to practice mimicking Kosaku's handwriting. Shinobu enters the room to bring Kira some tea and changes her clothes before going to bed. As Kira watches her changing, it becomes more difficult for him to suppress his temptations. He appears behind Shinobu and is about to strangle her, but she notices and screams. Kira quickly resolves the situation saying he didn't mean to scare her, causing Shinobu to misinterpret his intentions and realize she's finally falling for him.

Meanwhile, Hayato is in his room spying on his parents with electronic devices. He wonders if his parents really love each other. As he watches Kira on a surveillance camera, he grows more suspicious of what his "father" is up to.

Yoshihiro continues to search for random citizens to shoot with his bow and arrow in order to create more Stand users. He finds a long-haired teenage boy and shoots him with it, but the arrow is repelled. It merely gives the teenager a minor cut on his neck, leaving Yoshihiro baffled as to why it didn't pierce him.