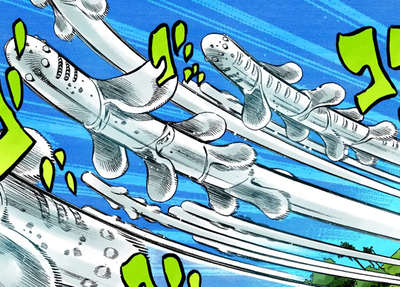 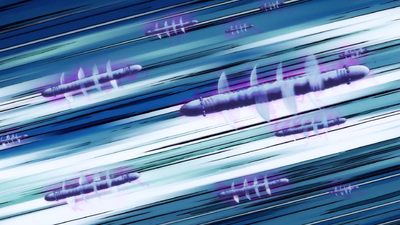 SO Episode 27
“
It's not even a Stand! It's an organism! I don't know what the hell it is, but this was the thing that was attacking us incredibly quickly!
”
—Ermes Costello, SO Chapter 113: Sky High, Part 2

They are a mysterious species that absorb body heat. Under the influence of Rikiel's Stand Sky High, they are led into battle against Jolyne Cujoh, Ermes Costello, and Emporio Alnino.

The rods are long, worm-like creatures of small size. They usually have a total of eight propeller-like wings, four on each side. They exhibit sexual dimorphism, though both sexes seem to look alike and only experts can discern the differences.[1] Rods have a cavity, presumably their mouth, located in their center, where they absorb other organisms' nutrients. Like cacti, the rods absorb water through the pores of their skin.[1]

The series is known for alternating colors between media, the information presented below may or may not be canon.
Body(Off-white)
Body(White tinted blue.)

The rods are parasitic, as they feast on other organisms' body heat. They live in remote locations and travel in swarms.[2] Under the influence of Sky High, they act on Rikiel's will, though these mechanisms are theorized to be more of a trust relationship.[3] Whenever Rikiel loses his confidence, the rods either suspend in midair[2][4] or turn against him. After Rikiel's defeat, the rods simply leave their master.[5]

The rods can travel at remarkably high speeds, up to 200 km/h (120 mph).[1] Because of this, they are nearly impossible to be seen by the naked eye, and can only be reliably captured through cameras and video recordings.[2] Moreover, they are especially nimble and can slip through small openings[6] and evade Stone Free's punches.[4]

The rods are surprisingly strong despite their small size. This is demonstrated by their ability to twist ankles just by flying past them.[7] 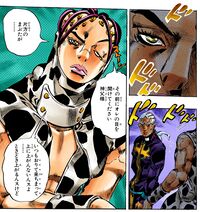 The rods' most notable ability is being able to absorb body heat as sustenance. Just by flying past an organism, the rods can absorb their body heat as food and use it as fuel. The effects of body heat dramatically decreasing brings about a variety of severe diseases and effects, ranging from eyelids being forced shut[2] to making entire muscles shut down or even decompose. At one point, they even demonstrate the ability to manipulate one's hand gestures and speech.[4][7] 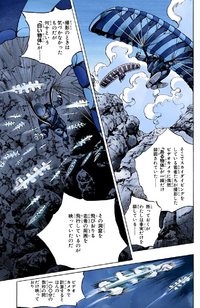 The rods have descended from a species called Balanoglossus. The species existed 3 to 4 hundred million years ago, probably during the Jurassic period, and is believed to have targeted other aquatic dinosaurs.[1]

Prior to discovering Sky High, Rikiel would be constantly attacked by the rods. The heat absorbing abilities of the rods left Rikiel with a variety of ailments, ruining his life.

Rods are the result of motion blur distorting flying insects

In reality, rods are merely the distortion of flying insects being captured in photographs or in video with certain exposure times or recording speeds, respectively. The insect flapping its wings and flying through the frame creates the illusion of a cylindrical shaped creature with multiple wings or sometimes depicted as two undulating membranes along the side of the body. The optical illusion was picked up by pseudoscientists such as cryptozoologists and ufologists who believe that rods are previously unidentified animals or extraterrestrial creatures. The debunked theory's presence in popular culture was the subject of a television show that Hirohiko Araki said he once watched, although he could not remember its title.[8]