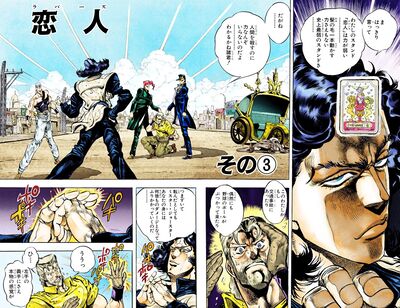 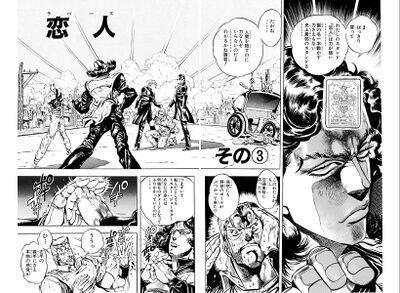 Lovers, Part 3 ( その③, Rabāzu Sono 3), originally The Micro Battle!! (ミクロの戦い!!, Mikuro no Tatakai!!) in the WSJ release, is the forty-ninth chapter of Stardust Crusaders and the one hundred sixty-second chapter of the JoJo's Bizarre Adventure manga.

Steely Dan explains his Stand, Lovers, is physically the weakest of all Stands, but its powers are deadly nonetheless. Once it enters someone's brain, it creates a link between them and its user - if Steely Dan were struck by a car, hit by a baseball, or even trip on the ground, Joseph would feel the effects several times over. He demonstrates this by cracking his knuckles, causing Joseph to feel a sudden pain on his artificial hand.

Steely Dan also reveals that Lovers is constructing a flesh bud in Joseph's brain; in 10 minutes, Joseph will die like Enya. An angry Jotaro tries to attack Steely Dan, but Kakyoin stops him, fearing what will happen to Joseph. Steely Dan smugly taunts Jotaro, daring him to attack. Knowing he won't attack, Steely Dan punches Jotaro in the gut, then hits him on the head with a rock. He announces that once Joseph dies, Lovers will enter Jotaro's brain and kill him in turn.

Joseph thinks of the time when he had poison placed in his heart and throat but got out of that problem. He tries to think of a plan, running off with Polnareff and Kakyoin. The latter warns Jotaro to keep Steely Dan away until they can deal with his Stand. Steely Dan plans to make Jotaro follow him around town until Joseph dies. When Jotaro declares he will make his oppressor pay, Steely Dan steals Jotaro's wallet and watch.

At a TV store, Joseph uses Hermit Purple to look inside his body. He finds Lovers inside his brain, working on the flesh bud. Polnareff and Kakyoin shrink their Stands and send them inside Joseph's brain to stop Lovers.

Meanwhile, at a ditch, Steely Dan plans to cross over, musing that if he tried to jump, he could twist his ankle, also hurting Joseph. He tells Jotaro to act as a man-bridge, as it would be exhausting to walk to a bridge. When he doesn't respond, Steely Dan kicks his leg on a fire hydrant, hurting Joseph badly. Steely Dan then enjoys the pleasure of a strong bridge he made of Jotaro, much to the latter's displeasure.

(Corpse only)
Enya the Hag

Author's Note
“
I saw The Rolling Stones' opening day performance! It was so cool~~!!! I went numb from the excited shouts of fifty-thousand people!!
”
—Hirohiko Araki
“
の初日公演を見た！カッコイイ～～！！！５万人の大歓声の中、私はシビレた！！
”
—Hirohiko Araki