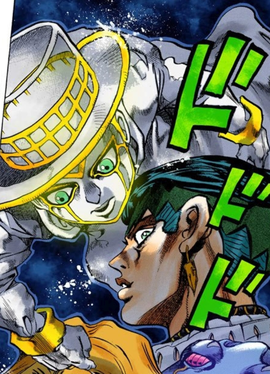 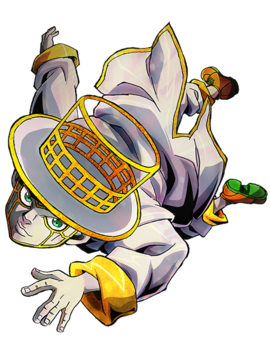 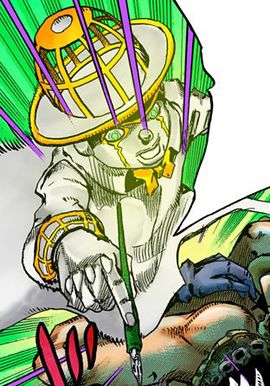 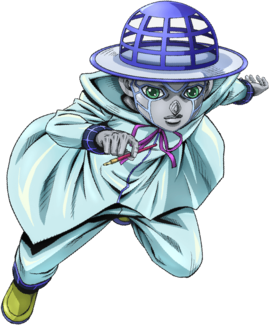 Poder Destrutivo
D
Velocidade
B
Alcance
B
Persistência
A
Precisão
C
Potencial
A
A
B
C
D
E
A: Muito Bom
B: Bom
C: Médio
D: Ruim
E: Muito Ruim
“
I'll be reading through your lives and experiences to get at that "reality" and use it for my work.
”
—Rohan Kishibe, Chapter 319

Heaven's Door (ヘブンズ・ドアー（天国への扉）, Hebunzu Doā) is the Stand of Rohan Kishibe, featured in the fourth part of the JoJo's Bizarre Adventure series, Diamond is Unbreakable, as well as the one-shot series, Thus Spoke Kishibe Rohan. It is a small human-like Stand that turns people into books for Rohan to read. 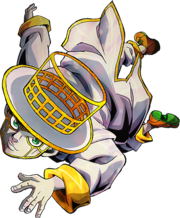 Heaven's Door resembles a small boy with the appearance of Rohan's manga character, Pink Dark Boy. It wears a long overcoat, closed to the end of its torso, and a bow tie. Its face has an outline that connects to lines emanating around its eyes. Its flat-topped hat is similar to a boater

, while in its first appearance, it wears an opaque fedora.

Rohan may summon it or induce its effect with certain paper drawings; or an air drawing with his finger in its image, when it is invisible save for its outlines.

Heaven's Door is portrayed as being white with golden outlines across most media featuring it, excluding the OVA where the outlines become blue.

Heaven's Door's basic ability is to turn people into books, pages unfurling from their bodies in the shape of whatever body part it opens from (for example, if from the face, the shape of the pages is of the person's entire face).[2]

The contents of the books contain detailed and absolutely true information on their subject, including physical characteristics, memories and thoughts from their earliest to their latest, personality, and any details on their Stand, if they have one.[2] Later on, Rohan uses this ability on a chicken leg to determine its expiration date.[7] Targets may be incapacitated to varying degrees while under this effect. Rohan can neither read his own memories nor perceive memories he shares with his target.[8]

A dying person's details are seen to gradually disappear.[9] However, Heaven's Door is effective on both ghosts and the undead (as shown on Reimi Sugimoto,[10] and zombie-like spirits in Rohan at the Louvre). In animals, details comprise relatively literal descriptions.

Occasionally, it is shown that since people under the effect of Heaven's Door literally turn into books, Rohan can also use this forced physical transformation to his advantage. Rohan has notably used this power to unravel Okuyasu's limbs[4] and at another time, save someone from being crushed by two speeding trains by transforming their body into a book and flattening it enough to fit between the trains.[11] In the TV drama adaptation of Deoxyribonucleic Acid, instead of Heaven's Door's usual ability, the memories of the characters Kyoka Izumi, Mao Katahira, Mai Katahira, and Taro Hirai are shown by literally transforming them into picture books.

By removing pages, Rohan causes his target to lose any memories detailed there, along with a proportionate quantity of body mass.[12] Should Rohan receive a substantial amount of physical damage or be knocked near unconscious, the removed pages will automatically return to their original source.

By writing into the pages of a person or object transformed into a book, Rohan may alter or erase memories, or put hypnotic-like commands into the person's mind.[12]

Rohan's target will obey commands written into them closely, even against mental resistance (for example, despite a phobia of immolation, Okuyasu is forced to hold a lighter to himself). Other impressive feats include commanding Josuke to fly backwards at 70 km/h[13] or allowing Koichi to speak Italian.[14]

While Rohan cannot read his own memories, he may write commands on himself. In one example, by writing on his forehead, he commands himself to repress all memories of the events of Rohan at the Louvre, though they return after the command rubs off. The canonicity of this is questionable, however, given the contradictory nature of the one-shot and its lack of affiliation with the Thus Spoke Kishibe Rohan series.