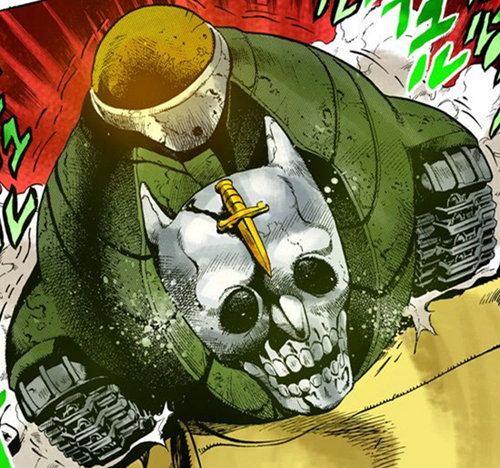 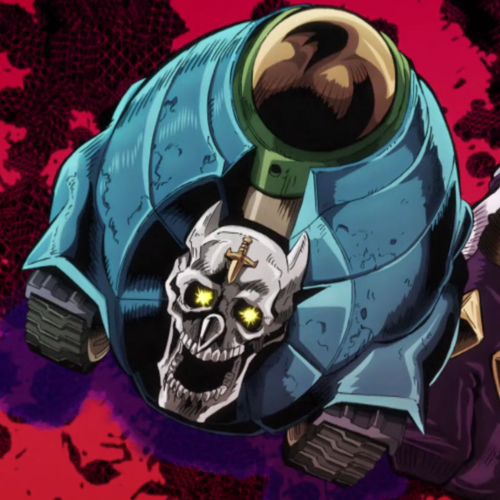 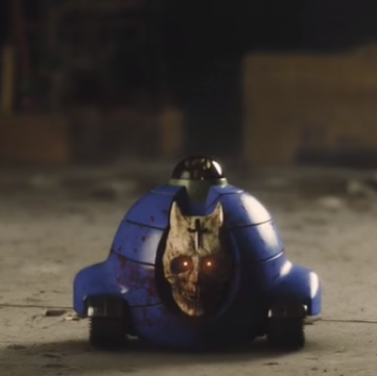 Sheer Heart Attack takes the form of a plated sphere with a superficial, removable knob on its top and tank treads on either side. Embedded at its front is a cat-skull similar to those on Killer Queen's body, with the addition of a downward dagger on the forehead, a movable jaw, and a short spike as a nose.[1] While it is not visible to non-Stand users, if Sheer Heart Attack attaches to someone, it will leave visible tread marks on their clothing. It also leaves an indentation on Kira's hand that doesn't appear to be visible to non-Stand users.[2]

Sheer Heart Attack is devoid of any personality as it is an automated substand. However, as part of it's autonomous nature, it blares seemingly preset statements to its targets including "Look this way".[3]

It is completely autonomous and has a great range, so Kira can safely engage Sheer Heart Attack and move a great distance away while it carries out its duties.[7] It seeks out whatever the warmest object in the vicinity is,[8] even changing targets the second a warmer object appears; upon reaching its target, it automatically induces an explosion with power and blast size equivalent to the heat of the target.[9] If Sheer Heart Attack's explosion was set off by a non-human source, it will continue to seek out targets until it explodes from a human.[10] Like Killer Queen's first bomb, Sheer Heart Attack's explosions remove all physical evidence of the target.[11]

Its main drawback lies in its autonomy, which will sometimes prevent Sheer Heart Attack from prioritizing killing Kira's intended human target(s).[12][13] Secondly, since it needs to explode from making contact with a human target to fully dissipate, should Sheer Heart Attack need to be deactivated while actively seeking a target, the user must physically return in the range of Sheer Heart Attack to deactivate and retrieve it.[14] Furthermore, Sheer Heart Attack can continue to be active even after Kira's hand has been cut off, seen when he uses this to escape Josuke and company. Cutting off his hand gives Sheer Heart Attack even more power, as well as the ability to withstand even Echoes ACT 3's 3 Freeze.[15]

The body of Sheer Heart Attack is nigh-indestructible, withstanding countless blows from Jotaro's Star Platinum,[16] but can still be affected by non-damaging Stand powers[5] and cracked if pulled apart at the mouth with tremendous force.[17]

Kira claims Sheer Heart Attack to have no weakness.