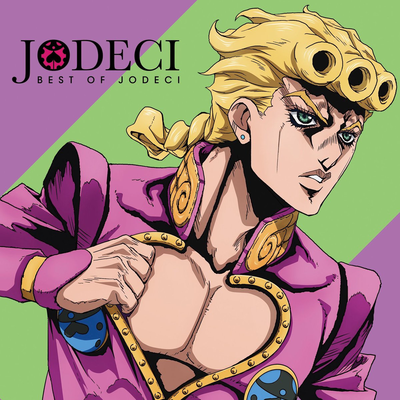 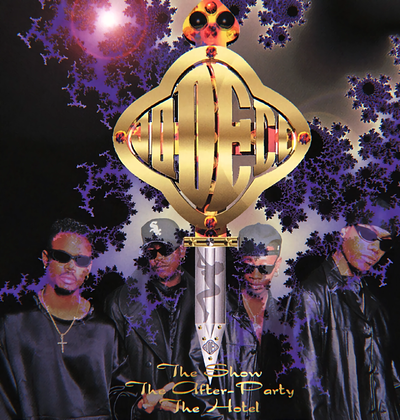 The Show, the After-Party, the Hotel

"Freek'n You" is a song by the American R&B group Jodeci from their third studio album The Show, the After Party, the Hotel, released in 1995. It is used as the first ending theme for JoJo's Bizarre Adventure: Golden Wind.

A special Best of Jodeci album was released in Japan on April 10, 2019, with album art prominently featuring Giorno Giovanna, and a second disc featuring different remixes of "Freek'n You".[1]

In front of the glass background, Sticky Fingers pans from the right posed in a battle position. Its left arm is unzipped with its hand extending beyond the now entering Bruno Bucciarati. Bucciarati's right arm is raised over his head and his left placed just above his legs. Behind Bucciarati in the bottom right, the Arrow is overlapped on the glass.

The gradient on the rows of glass transition from blue to purple. Sex Pistols then pans in next to Bucciarati and the image in the glass fades into the legs of Purple Haze. Each of the Pistols rides a bullet, doing various poses. One rides it like a surfboard. Two lays its head on the bullet and raises its arms in joy. Three, Five, and Six all ride as if on horses. Seven hugs the bullet in its arms. Guido Mista now pans in as well, with his right arm hung above his head, holding his revolver. His left hand rests on his left knee, with both legs bent behind him. The Arrow at the bottom right fades out and the Purple Haze on the glass transitions into Moody Blues. Polpo's lighter that appears to be lit and hanging upside down, faintly appears near the top middle.

Narancia Ghirga pans in, right arm behind his head with his left facing in front of him, hand open. Narancia is slouched while almost in a sitting position. Aerosmith appears in front of Narancia, flying upwards with a birds-eye-view of its top. Sex Pistols then takes over the glass images, showing only Seven and Six.

The glass colors transition from purple to light blue. Moody Blues now pans in, sitting, legs crossed, the right arm supporting its weight, with a closed fist resting on the side of its head. Leone Abbacchio appears next, in a backward fall position, right leg on the ground and his left leg lifted. Abbacchio stares at the palm of his left hand, raised above him, with his mouth hung open. His right hand hangs by his side, his palm closed.

The hue on the rows of glass gradually becomes green. Pannacotta Fugo comes in, right hand on hip, left hanging by his side. His legs are bent with his left behind his right. The hand of Sticky Fingers now appears in the glass images alongside Aerosmith. Purple Haze pans in, knees touching together, left arm raised behind him, and its right hanging down, stopping at its left thigh. Polpo's lighter fades out.

Trish is now fully revealed, panning in, in a spinning position. Her spine bent back, legs facing far back, and her right arm trying to reach for her feet, while her left arm is stretched down in front of her. A large Passione badge fades in behind Trish, in the middle. The background gradient lastly transitions to gold.

Gold Experience pans in with its right arm bent up behind it, and its left arm and hand bent in front of it. Its mouth is wide open, as if it is yelling. It stands on its right leg, with its left bent fully under its thigh. The Aerosmith on the glass images is replaced with the bottom portion of Bucciarati. Finally, Giorno Giovanna appears beside his Stand. He's posed in a sitting position, legs crossed. He has his right hand raised to his head and his left hand crossed to his right side. It freezes on Giorno and Gold Experience, and then ends.

The second version of the ending starts with the camera panning across a barren land under a dark blue sky. Suddenly, a plant sprouts from the ground, rapidly developing as the camera follows its growth. Eventually, shadows of the leaves occupy the whole screen to transition to the next scene.

The camera scrolls upward along with images of the main cast and their Stands posing in front of a golden background decorated with elaborate motifs, ending up to Gold Experience and Giorno. Throughout the scrolling, the vine briefly but periodically appears on the screen, growing as it fades away. After Giorno appears, the shadows of the leaves invade the screen again.

The camera thus moves alongside a rocky object which is revealed to be an eye when it zooms out. The ending wraps up with the view broadening to reveal an entire bas-relief of the main cast and their Stands. Said bas-relief incorporates a title spelled "Vento Aureo GIO GIO" and features several details such as additional sculptures of plants, butterflies, zippers, and the Arrow, all of which are overgrown with vines.