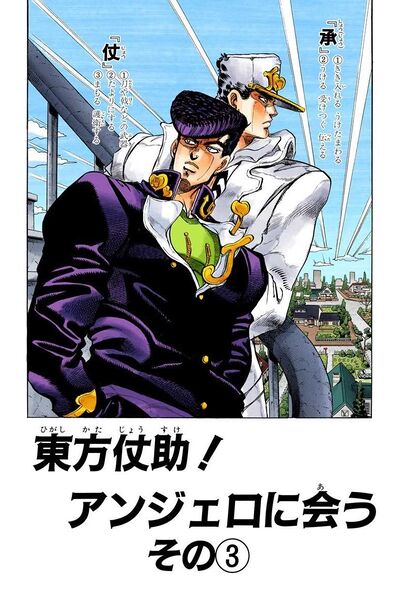 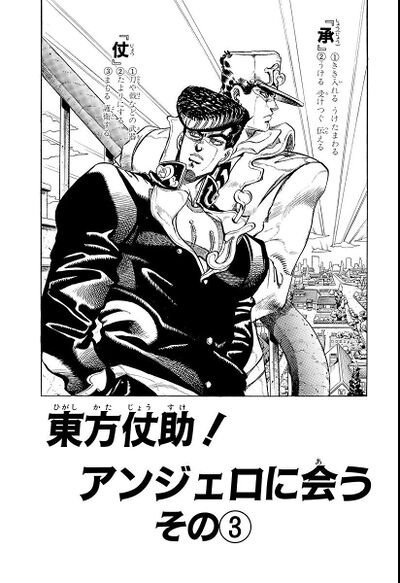 Josuke Higashikata! Meets Angelo, Part 3 (東方仗助！アンジェロに会う その③, Higashikata Jōsuke! Anjero ni Au Sono 3), originally What He Was Waiting For... (待っていたのは…, Matteita no wa...) in the WSJ release, is the sixth chapter of Diamond is Unbreakable and the two hundred seventy-first chapter of the JoJo's Bizarre Adventure manga.

With his grandfather gone, Josuke leaves Ryohei's things at home to remember him by. In the kitchen, Jotaro insists that what Josuke needs to drink must come from newly opened bottles and cans, and he can't easily eat or drink until Anjuro is beaten. Josuke goes on to explain he can't close up his own wounds with his Stand, and if Aqua Necklace gets inside, he will certainly die. Jotaro decides to set bottle traps for Aqua Necklace. However, Anjuro boasts that he has already seen through their plan, and when he kills Jotaro and Josuke, he'll go after and rape Tomoko.

Three days later, a rainstorm arrives, and Aqua Necklace uses the opportunity to attack Jotaro, leaving a hand-shaped injury. Josuke finds pots and pans with boiling water in them. The faucets have been turned on as well. Aqua Necklace then attacks by appearing in the steam in the room. They find out that Anjuro had snuck into the house and planted water for his Stand, making leaky places in the roof. Even at a disadvantage, Josuke knows that the man who killed his grandfather is near and laughs under the pressure.