Another One Bites the Dust, Part 3 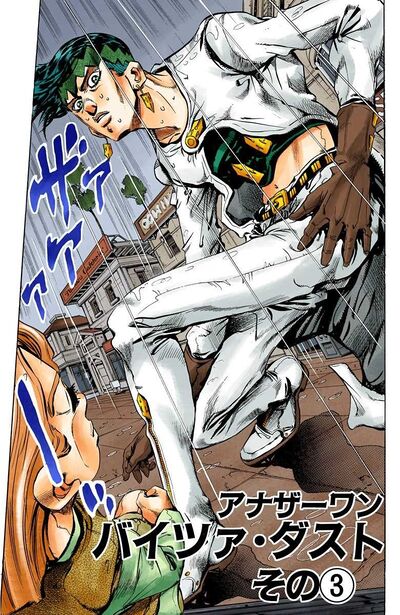 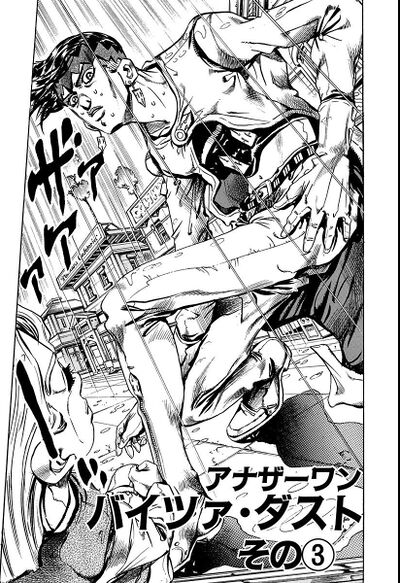 Another One Bites the Dust, Part 3 (アナザーワン バイツァ・ダスト その③, Anazāwan Baitsa Dasuto Sono 3), originally I've Finally Found Him! (ついに見つけたぞ！, Tsuini Mitsuketa zo!) in the WSJ release, is the one hundred fifty-fifth chapter of Diamond is Unbreakable and the four hundred twentieth chapter of the JoJo's Bizarre Adventure manga.

Rohan realizes that the events written in Hayato's memories are predicting the future. As he wonders how this is possible, he sees the page revealing that Kosaku Kawajiri is actually Yoshikage Kira in disguise. He is excited by the discovery, but as he continues reading he sees that the next page reads, "He killed Rohan Kishibe." Killer Queen crawls out from under the page and activates Bites the Dust. Rohan tries to counter with Heaven's Door, but is blown up nonetheless.

As Rohan collapses, he remembers that he promised to meet Koichi at 8:30. He sees Koichi and Jotaro approaching, but is disintegrated before he can call out to them. Kira explains through Killer Queen that anyone who learns his identity from Hayato will be blown up by his new ability. Hayato wakes up just in time to see Rohan explode and immediately wakes up once again in his own bed.

At first, Hayato believes he has had a strange dream, but again, his mother comes in to wake him only to find him already up, and again the newscaster on television is surprised to discover the cameras are already rolling. The phone rings again, and as Shinobu calls to him to answer it, Hayato realizes the morning is repeating.