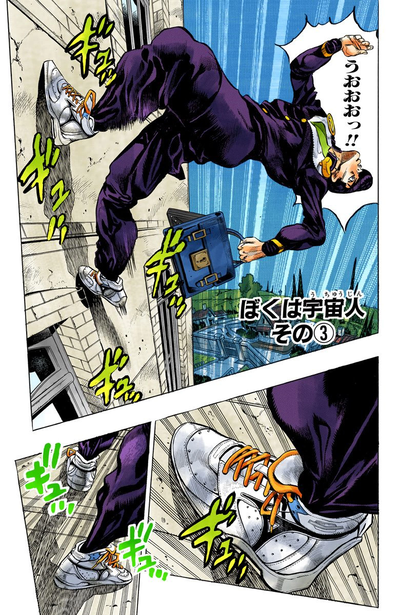 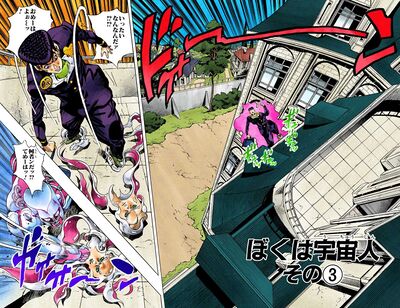 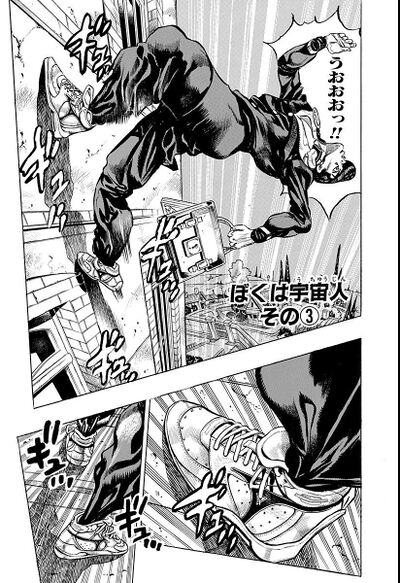 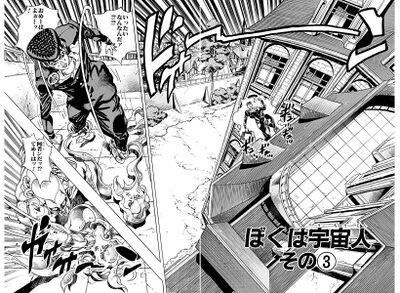 DU Episode 27
I'm an Alien, Part 3 (ぼくは宇宙人 その③, Boku wa Uchūjin Sono 3), originally The Alien's Repayment! (宇宙人の恩返し！, Uchūjin no Ongaeshi!) in the WSJ release, is the one hundred fifteenth chapter of Diamond is Unbreakable and the three hundred eightieth chapter of the JoJo's Bizarre Adventure manga.

Nu (who is now a pair of sneakers being worn by Josuke) forcefully transports Josuke onto the roof. As a result, Josuke summons Crazy Diamond and pretends to punch the alien, asking him what he wants. Nu doesn't react to the Stand, making Josuke believe that he isn't a Stand user but indeed an alien possessing powers.

Taken aback by the revelation, Josuke thinks on what he needs to do, while Nu insists on rewarding him for "rescuing" him from the siren. Josuke sees a Kameyu Department Store catalogue and has the idea to use Nu's shapeshifting ability to transform into a casino die. For Nu's first attempt, he transforms into a giant die with two sides both showing five dots.

Once Josuke lectures the alien on how a die properly looks, he tries rolling the die, which tickles Nu and also gives him motion sickness. Josuke then spends some time practicing so that Nu could give a desirable result for any dice roll. He plans to get rich by ripping off Rohan of his money by cheating on a game of dice.