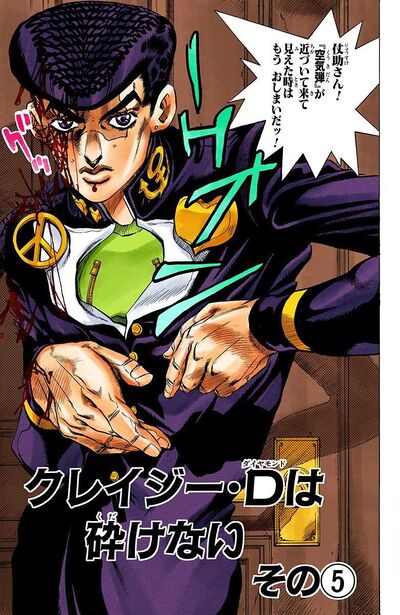 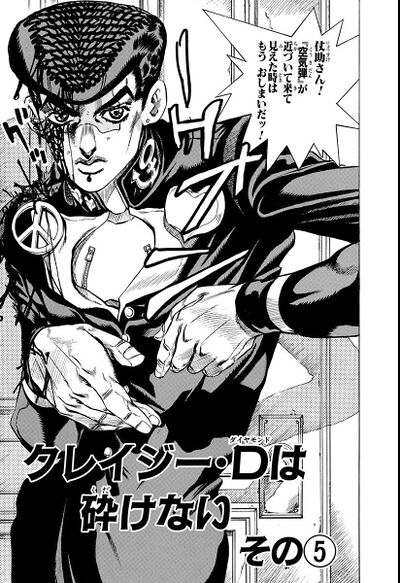 Unable to see the primed bubble, Josuke uses a nearby ashtray and throws the ashes into the air. Josuke spots the air bomb with the ashes but becomes increasingly worried and confused as the bomb follows him around the house. Hayato deduces that the bomb is chasing them automatically, but Josuke tells him that the air bombs don't follow the same principles as Sheer Heart Attack, as the bomb didn't chase after the hot ashes. Josuke figures out that Kira is guiding the bomb manually and asks Hayato to find him.

Hayato discovers Kira outside hiding in plain sight but unable to see them which confuses Hayato even more. Josuke crushes a flower vase, getting his blood on the shards. He flings a glass shard at a window as Kira detonates the bomb, causing Josuke to get impaled by debris from the staircase banister. Kira celebrates but notices the glass shard flying towards him. Killer Queen blocks the shard, causing it to ricochet off its hand. Josuke, injured but alive, reveals the shard of glass to be his homing missile. Josuke healed the blood on the shard, causing it to return to the bloodstain he left earlier on Kira's jacket. The shard flies back and impales Kira in the back, becoming embedded in his body.