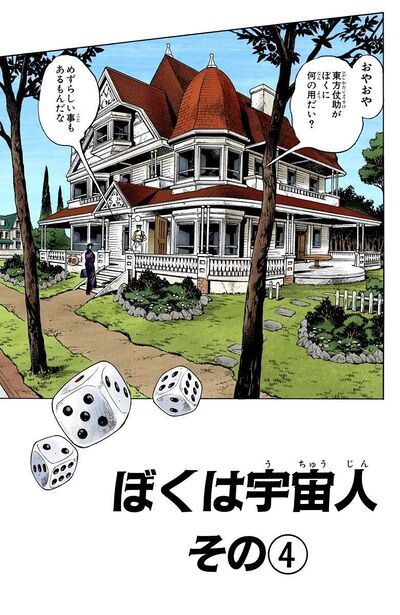 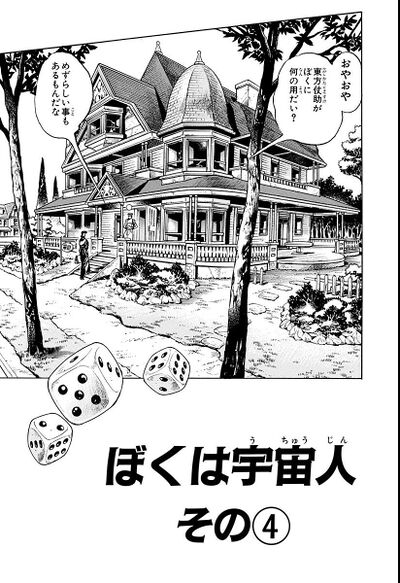 I'm an Alien, Part 4 (ぼくは宇宙人 その④, Boku wa Uchūjin Sono 4), originally Cee-Lo! (チンチロリン！, Chinchirorin!) in the WSJ release, is the one hundred sixteenth chapter of Diamond is Unbreakable and the three hundred eighty-first chapter of the JoJo's Bizarre Adventure manga.

Josuke visits Rohan at his house. Rohan, having an already shaky relationship with Josuke, asks with suspicion what Josuke wants. The teenager begs Rohan to play cee-lo with him, presenting his dice to Rohan and explains that he needs money for summer. Despite his hatred towards Josuke, Rohan accepts to play but on the condition that they use the dice set in his drawer.

Josuke meekly insists that they use his dice, but Rohan is too suspicious of Josuke and wants to take Josuke's last 30,000 yen to spite him. However, Josuke is actually secretly jubilant as he correctly predicted what Rohan would do and planted Nu beforehand in Rohan's drawer.

Setting the game in the back of his house, Rohan lays out some rules, notably that each roll is made with three dice, and that a roll of 1-2-3 is a double loss while a triple 6 is a quintuple win on one's bet. Rohan then grimly warns Josuke of what happened to cheaters in the past. The game of cee-lo begins and Josuke manages a highly suspicious triple 6 in his first roll and has difficulties maintaining his masquerade. Rohan then rolls a 1-2-3, making him lose 20,000 yen, increasing Rohan's suspicions.