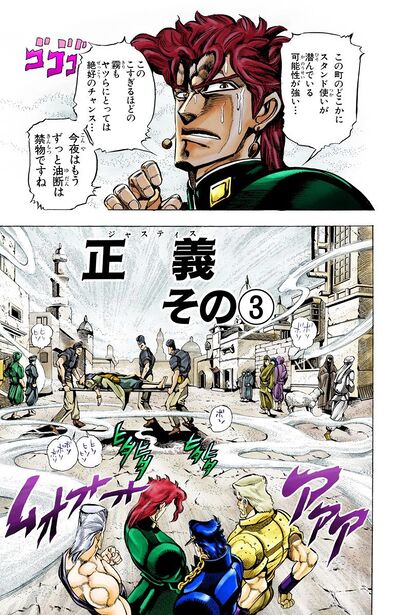 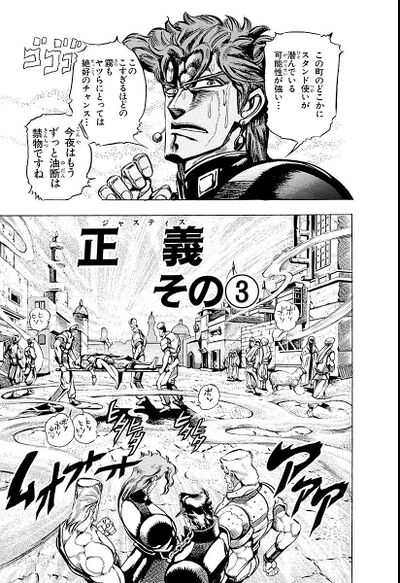 Justice, Part 3 ( その③, Jasutisu Sono 3), originally The Puppeteering Justice (あやつり正義, Ayatsuri Jasutisu) in the WSJ release, is the forty-third chapter of Stardust Crusaders and the one hundred fifty-sixth chapter of the JoJo's Bizarre Adventure manga.

The police do not seem to care about the murder case, but take the body nonetheless. Polnareff finds it weird, but Enya tells them not to worry about it. She boasts about her hotel and tells "Mr. Joestar" to accompany her. Jotaro asks how she knew his name was Joestar. Fearful she might have been discovered, Enya responds that she heard Polnareff use the name earlier.

Polnareff asks Enya why her left hand is wrapped in bandages, and she tells him she spilled coffee over it earlier, intending to hide her relationship with J. Geil. Polnareff continues to be friendly, but Enya silently swears he will suffer the most for killing her son.

Inside the hotel, Enya meets Hol Horse, who vows to revenge his best friend J. Geil. Enya believes he abandoned her son in the middle of the battle despite Hol Horse claiming J. Geil was dead before he arrived. She attacks him with Justice, causing a wound on his wrist to take the shape of a hole without any signs of blood. Enya explains that when the fog comes in contact with any wound, it will transform it into a hole and act as a string, controlling the body of the wounded like a puppet. Hol Horse calls Emperor out and shoots Enya, but Justice turns his hand against his own face before the bullet is fired. Enya proclaims that Justice always wins.