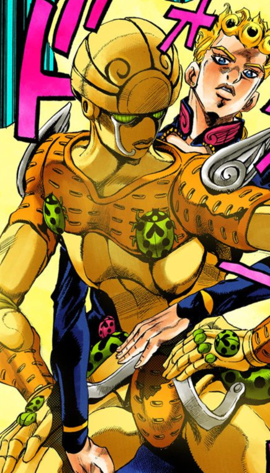 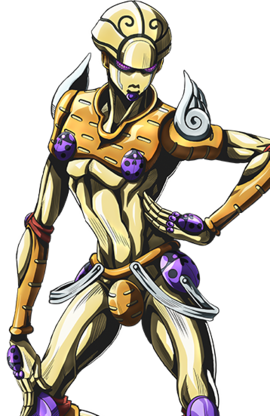 Gold Experience (ゴールド・エクスペリエンス (黄金体験), Gōrudo Ekusuperiensu) is the Stand of Giorno Giovanna, featured in the fifth part of the JoJo's Bizarre Adventure series, Vento Aureo. It is a short-range power-type Stand with the ability to create life from inanimate material. Gold Experience is a humanoid Stand of slender build and average height, like Giorno. The top of its head is similar to that of a typical helmet of a soldier, with curved markings similar to the letter J coming down from the eyes on both sides. There are stylized wings on its shoulders and large ladybugs

all over its body, which seem to parallel the ladybug emblems present on Giorno's design.

Its design is based on the scarab beetle, as a symbol of creation in ancient Egypt, and on ladybugs, symbolizing regeneration, with its angel wings as a symbol of peace.[2]

It wears slings, similar to the suspenders on DIO's pants.

Befitting its name, Gold Experience is portrayed in most media featuring it in a shade of yellow, but changing colors for some of its details, most notably its ladybugs ornaments.

Gold Experience doesn't have any personality to speak of and follows its user's commands without manifesting any will. Its Stand Cry (seemingly communicated by itself or by Giorno, alternately) is "Muda Muda Muda~!", like DIO and his Stand, The World.

This ability's most featured use is converting inorganic objects into living organisms, be it an animal or a plant. For instance, Gold Experience can transform a piece of luggage into a frog[3] or a lighter into a rose.[4] The lifeforms can persist for a long time and even a significant distance from Giorno. It can also freely cancel this effect and return an object to its original inorganic state.

The speed of the transformation varies wildly, depending on the desired form: an object morphing into a plant is always shown to be fast, but animals generally take more time. Thus, transforming parts of a helicopter into a tree is nearly instantaneous and violent enough that the branches can burst through metal,[5] but transforming a rubber lifesaver into a fish takes a noticeable amount of time.[6] Giorno has also instantaneously transformed drops of his blood into a swarm of ants,[7] suggesting that the transformation time is proportional to the complexity of the life form he creates.

Giorno frequently produces small life forms (frogs, snakes, flies) and plants of which he has no control. Thus, when he creates an animal, he has to guess what the animal is likely to do in order to take advantage of it. Since the animals do not always act the way he predicts, like when a snake accidentally burns itself on a lighter, using them can prove detrimental.[8] Notably, however, life forms created from parts of a whole, such as someone’s tooth or debris from a statue, will naturally make their way back to whatever it came from, such as when Giorno transformed Narancia’s shoe into a fly so that he could be tracked.[9] If the environment is absolutely unsuitable for life, such as when White Album decreased the temperature of the environment to around -100 °C, then Giorno cannot transform objects into lifeforms.

The transformation was originally portrayed similarly to a fetus growing into an organism,[3] but was eventually finalized as an object molding into Giorno's desired life form.
Damage Reflection

Initially, when any of the created life forms were attacked, the damage would be reflected back at the attacker, including Stand abilities. For instance, Luca had tried to smash a frog with his shovel only for his head to be bashed instead.[3]

Gold Experience's ability can also be applied to living individuals, causing their thought processes to greatly accelerate. When Bruno Bucciarati was hit by one of Gold Experience's punches, his consciousness accelerated to such a point that he perceived everything else to move slowly. However, his body did not follow the sudden surge of speed and could hardly move, and Bucciarati had an out-of-body experience as his consciousness separated itself. While it heightens the senses of its victims as well, it also means that the then-defenseless body will feel a much more acute and intense pain over a much longer period of time when injury is taken; a punch to the face from Gold Experience that lasted a brief instant was perceived by Bucciarati as lasting much longer, even long enough for him to think full sentences and internally describe the sensation of pain as he's being punched.[10]

Gold Experience can speed up an already-existing life form's life through its ability, for instance making a plant grow faster and even wither in an instant.[11]

Inspired by Baby Face's ability to transform body parts into inert cubes, Giorno discovered that he could do the reverse and create singular body parts and organs out of inorganic matter. Thus he is able to heal gruesome wounds through various means. In one instance, he transforms bullets into the very flesh they pierced[12] and grew back one of his hands out of a brooch.[13] The process of replacing lost organs and flesh with created ones is noted to be painful, although neither Giorno nor Narancia react when this ability is used on them, with only Mista feeling any sort of pain from the process when Giorno heals him.
Cloning

Gold Experience was shown to clone Coco Jumbo by putting some of its cells on Giorno's brooch, replicating the turtle and its Stand ability.[14]

Thanks to Gold Experience's mastery over life, Giorno can sense life itself. Giorno himself claims that life energy to him exists in "clusters". When he touches someone or something, he can sense other lifeforms from within, allowing him to check if someone is alive or even determine how many souls there may be inside a given vessel.[7] He also planned to track Diavolo by planting a brooch given life on the latter to sense it from afar and stalk the Boss.[15] Giorno also applied this ability by touching the plane that Team Bucciarati planned on flying to Sardinia in, making sure that nobody was inside before any of them boarded.