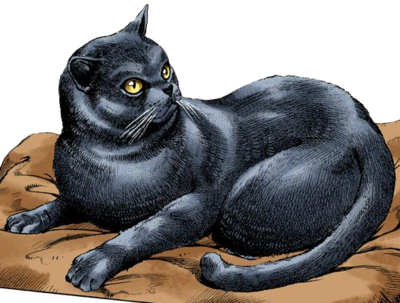 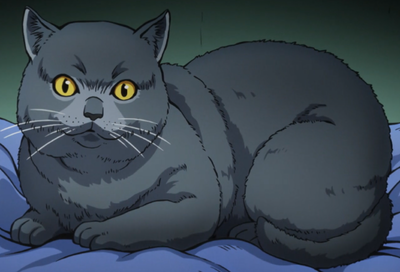 Sticking his head in paper sacks
Watching TV
Being praised[3]

DU Episode 29
“
Wow, the sun is really warm and relaxing today. Let's start the morning off with some grooming! My coat is my pride, after all.
”
—Tama, Chapter 393: Cats Love Yoshikage Kira, Part 2

Originally a street cat hit by the Arrow, Tama is taken in by Yoshikage Kira after becoming a plant-Stand hybrid named Stray Cat.

Tama is a blue-grey furred British Shorthair cat with honey-gold eyes whose most defining characteristic is a gaping hole in his throat caused by the Arrow.

Tama is a typical cat who is stubborn and territorial to his spot in the cellar when Shinobu Kawajiri attempts to chase him out. When his Stand ability manifests, he resurrects as a plant with the memories of his previous life and because of this he has similar characteristics of any normal cat. Like all cats, Stray Cat has a hunter instinct and is seen chasing after insects, thrown pieces of paper, and birds. He is proud of his former fur and tail. He loves running and jumping but cannot do so as a plant.[4] Stray Cat likes tuna, shrimp, sticking his head in paper sacks, watching TV, and being praised. Like all cats, he dislikes direct eye contact, having his nose blocked, cigarette smoke, wasabi, oranges, and being cold.[3] After Kira's defeat, he gets along well with Okuyasu's father and takes a liking to him[5]

Stray Cat is vindictive and aggressive, and the acquisition of his power makes him confident in his ability to fight anyone.[6] He considers anyone who hinders him to be an enemy and will seek to eliminate them with his bubbles, be it Yoshikage Kira protecting Shinobu from him,[7] Hayato Kawajiri trying to close the window on the plant,[8] or anyone giving the impression of attacking him. Kira uses that aggressiveness to his advantage against Josuke Higashikata.[9] Stray Cat is also vicious, as seen when he tries to kill Kira by pushing a bubble into Kira's bloodstream and his heart.[7] He bears a deep grudge against Shinobu, who hit him with a broom[4] and will attack her on sight.[6]

He retains his laziness as well from when he was a cat. For his winter plans, it's stated that although he wants to stay active, Stray Cat plans to sleep a lot under the kotatsu.[8]

Stray Cat allowed Tama to resurrect himself into a sentient plant that retains his intellect and personality from when he was formerly a cat. His ability also allows him to manipulate the surrounding air and form air bubbles to shoot at enemies.

Upon reincarnating as a plant, Stray Cat is confused by his new nature as a sentient plant but otherwise isn't really disturbed. When Shinobu Kawajiri wanders near him, Stray Cat remembers that she tried to beat him with a broom and instinctively shoots a bubble at Shinobu's toenail, ripping it off. Shinobu is unaware of what caused this and retreats to her home. Satisfied, Stray Cat kills a bird with his bubble and licks its blood.

Hayato Kawajiri becomes the host of Bites the Dust, an ability that kills anyone who interrogates Hayato about Kira and rewinds time to one hour before.

Tama appears in Diamond Records in his Stray Cat form as an assist character in both the Action Battle and Tactical Battle game modes. He has a 3 star assist, and a 4 star assist, both of the 'Solitary' type. His 3 star assist does not include an assist ability, as 3 star assists only function as stat boosts for the playable statue they are equipped to. Like all assist characters, when the active assists link together, his assist ability may provide extra effects (Action Battle mode only). He also appears in his matured state alongside Hayato's assist, and in the moveset of matured Yoshikage Kira.
Moveset

(Assist Ability) Stray Cat shoots an air bubble that wraps around opponents and captures them, temporarily stunning them.