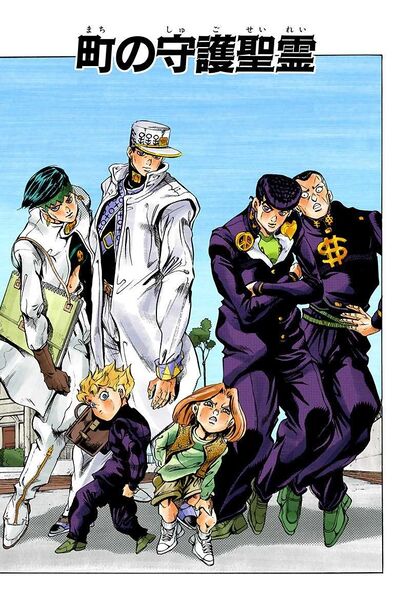 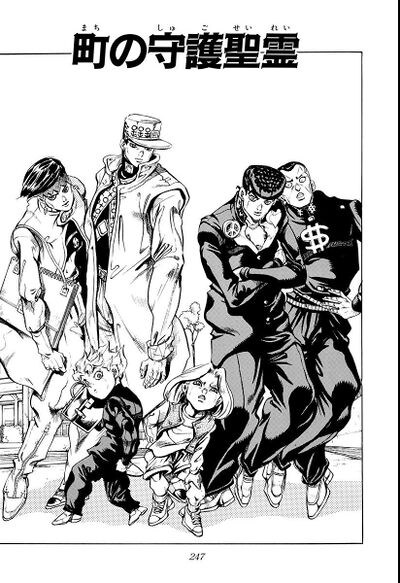 Town Guardian Spirits (町の守護聖霊, Machi no Shugo Seirei), originally I'd Like to Judge You! (裁いてほしい！, Sabaite Hoshī!) in the WSJ release, is the one hundred seventy-third chapter of Diamond is Unbreakable and the four hundred thirty-eighth chapter of the JoJo's Bizarre Adventure manga.

As Kira lies crippled in the middle of the street, believing he can still win, an ambulance that was called to help save Kira backs over his head and upper torso: crushing and killing him. Josuke and the others recoil in shock as paramedics pronounce Yoshikage Kira dead at the scene. The woman who Kira confessed his identity to informs the paramedics about what happened prior to his death as Rohan and Hayato express that Kira got what he deserved. Meanwhile in Ghost Alley, Kira finally remembers the events of his death as Reimi reminds him of his first murder by showing her scarred back; prompting him to finally remember her name.

Kira realizes that they are both in Ghost Alley and recalls the advice his father gave him: to never look back, otherwise you will be dragged into a hellish other realm for eternity. Kira, regaining his original form, takes hold of Reimi as he attempts to exact final revenge on her by forcing her to look behind herself, which would cause her to be dragged away. Kira then laughs, believing that with her gone, he can finally achieve the peaceful existence he sought in life as a ghost. However, Reimi rebukes Kira on his foolish actions. Arnold then rips off Kira's hand with his jaws, prompting him to fall down from the impact and thus, look behind himself. As he stares in horror at what awaits him, a multitude of disembodied hands swarm Kira as Reimi calmly watches.