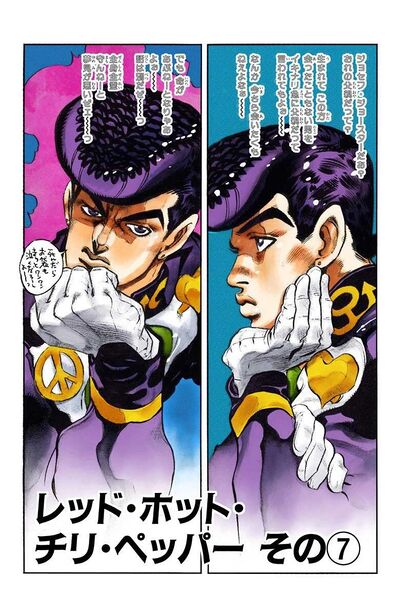 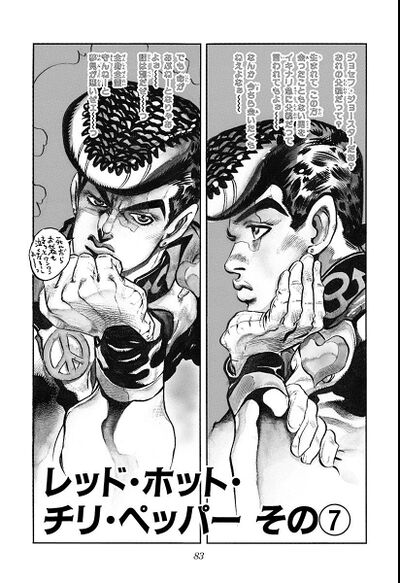 On his way to the Speedwagon Foundation boat, Okuyasu is still anxious not to have spotted Red Hot Chili Pepper, and there are now only 25 seconds for Otoishi to kill Josuke and Koichi before he can catch up to Jotaro. Having no other choice, Otoishi releases his Stand's full power, to the point where it emits waves of energy that are bright enough to blind onlookers, at the cost of depleting Red Hot Chili Pepper's energy. It attacks Crazy Diamond, who tries to retaliate, but after a small moment, Red Hot Chili Pepper punches Crazy Diamond and Josuke with it across the marina, then punches them into a forklift truck. When Red Hot Chili Pepper advances toward Josuke to gloat and finish him off, Josuke reconstitutes a rubber tire which was destroyed earlier and traps Chili Pepper inside of it. Otoishi panics but soon reveals that his Stand still has enough power to punch through the tire. However, when it does so, the tire flies toward the ocean with Red Hot Chili Pepper still in it, and the water disperses the electricity which has been fueling the Stand, Otoishi loses consciousness while still standing in the middle of the marina.