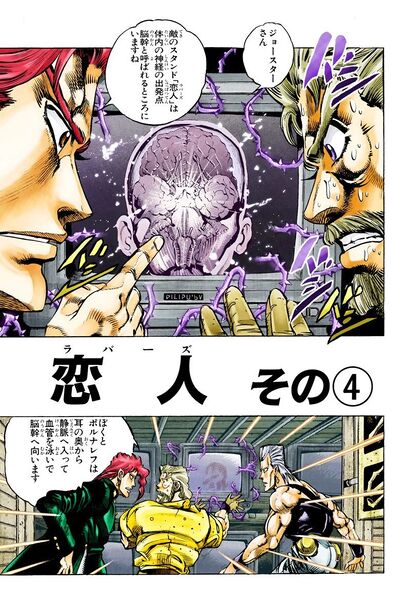 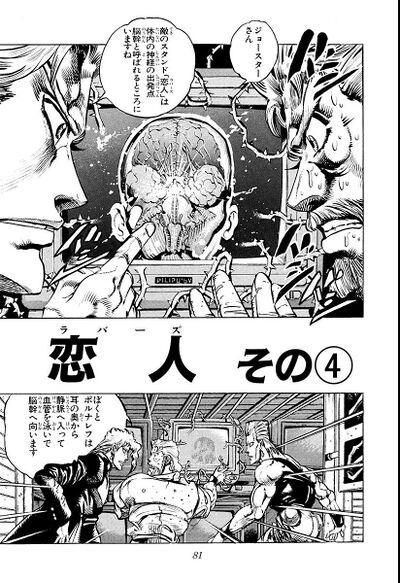 Lovers, Part 4 ( その④, Rabāzu Sono 4), originally I Am Lovers! (恋人は俺だッ！, Rabāzu wa Ore da!) in the WSJ release, is the fiftieth chapter of Stardust Crusaders and the one hundred sixty-third chapter of the JoJo's Bizarre Adventure manga.

As Silver Chariot and Hierophant Green travel in Joseph's blood vessels, Steely Dan commands Jotaro to scratch his back. Because of the link between him and Steely Dan, Joseph can't concentrate on his Stand and attracts people with his gesticulations, forcing them to buy the TV in order to move to a more isolated location.

Finally, Polnareff and Kakyoin find Lovers in Joseph's brain. Silver Chariot seems to have the upper hand, but he realizes that Lovers can use brain cells to disguise himself as anything, including Hierophant Green himself. Because of this, Polnareff is the first to be hit.

Meanwhile, Steely Dan forces Jotaro to clean his shoes. When he sees Jotaro writing the list of everything Steely Dan is doing to him in order to pay him back later, he slaps him.