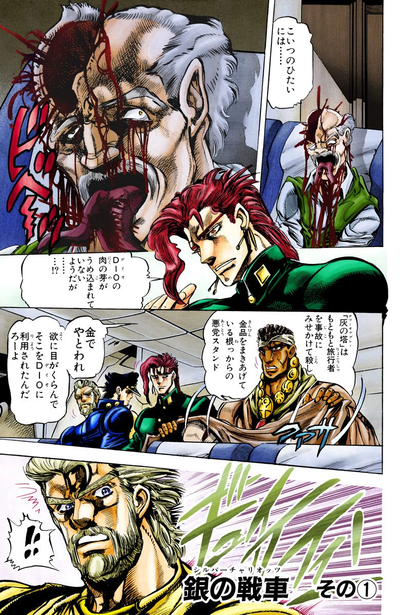 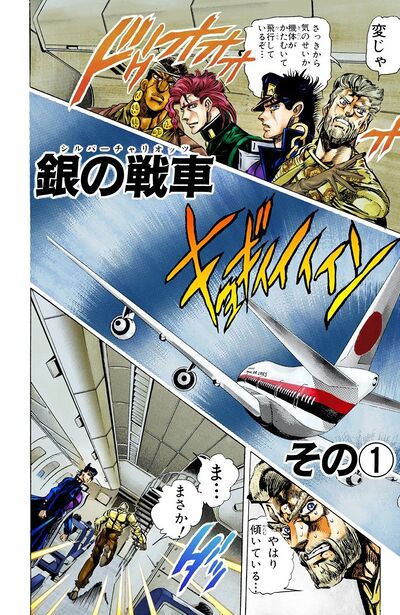 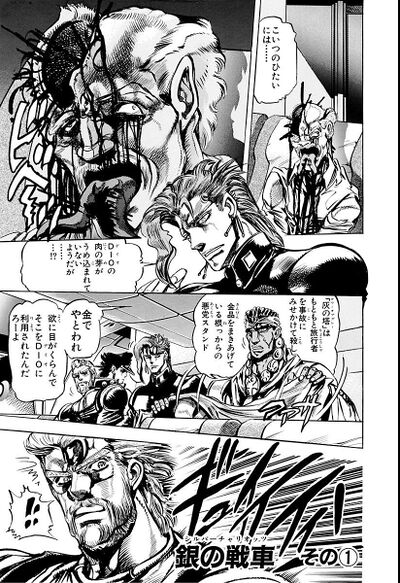 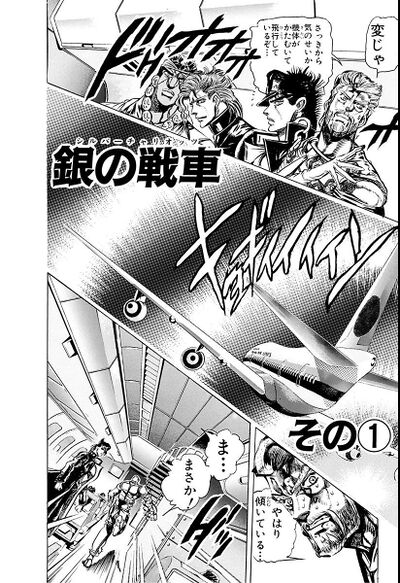 Silver Chariot, Part 1 ( その①, Shirubā Chariottsu Sono 1), originally A Terrifying Lunch Time (恐怖のランチタイム, Kyōfu no Ranchi Taimu) in the WSJ release, is the eleventh chapter of Stardust Crusaders and the one hundred twenty-fourth chapter of the JoJo's Bizarre Adventure manga.

Gray Fly is defeated, but the group's plane suddenly begins to dive, and they confirm their suspicion by checking the cockpit and find out that the pilots have had their tongues ripped out by Tower of Gray. Gray Fly stands up and confronts the Joestar Group to spite them before dying and reveals that DIO controls many Stand users who will harass them throughout their journey.

As the only one with a semblance of experience in piloting planes, Joseph takes control of the plane and remarks that this is the third plane he will have crashed, to Jotaro's annoyance. The plane safely lands on the ocean and the passengers are soon rescued.

Finding themselves in Hong Kong, the group rests themselves in a restaurant and debate their next course of action. Joseph argues that they still have time to reach Egypt and decides to go by sea in order to keep innocent people safe. The group is then approached by a French tourist, who asks for help ordering food. Jotaro tells him to get lost, but Joseph invites him to join them.

At the end of dinner, the guest holds a star-shaped carrot slice and holds it on the back his neck, wondering out loud where he might have seen that mark before. Surprising everyone, a knight-like Stand attacks Joseph by stabbing his prosthetic hand; Avdol immediately counter attacks with Magician's Red's flames but the Stand's rapier easily deflects the flames on a nearby table and shapes them into a clock. At the same time, the Frenchman reveals his Stand's name: Silver Chariot.

(Mentioned only) (Death)
Tower of Gray