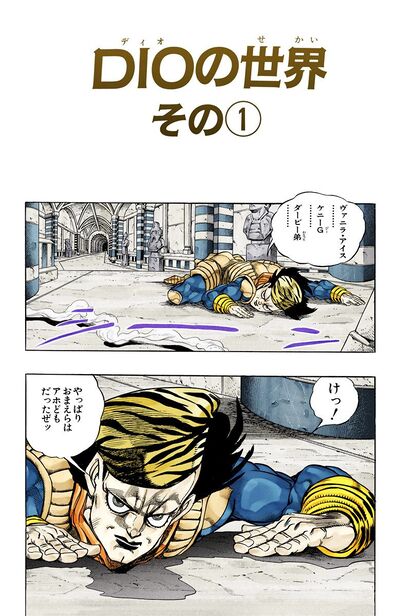 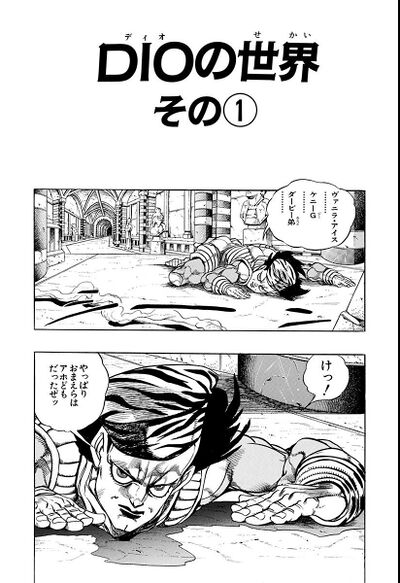 DIO's World, Part 1 (DIOの世界 その①, DIO no Sekai Sono 1), originally The Immortal Nukesaku!? (不死身!?のヌケサク, Fujimi!? no Nukesaku) in the WSJ release, is the one hundred thirty-fourth chapter of Stardust Crusaders and the two hundred forty-seventh chapter of the JoJo's Bizarre Adventure manga.

A small man appears (Nukesaku, Japanese for idiot; 抜け作), his ear to the ground of DIO's mansion, noting Vanilla Ice, Kenny G. and Telence T. D'Arby's demise. With a stroke, he launches himself to the ceiling of the room, hissing, and reflecting on the typical dismissal the three afforded him; casually calling him by "Idiot." Stating his aim to claim Jotaro's death for himself, he somersaults down a staircase previously damaged by Vanilla Ice.

Kakyoin halts the group, comprising Jotaro and Joseph, a distance from a large doorway; when a pretty young woman stumbles out, breathing heavily. She launches into crying histrionics, apparently worried that the group is more of DIO's men. Joseph reassures her before Jotaro (Star Platinum) punches her in the face; sending her flying through one of the half doors in the doorway, towards a far wall.

Righting herself, the face of the man appearing earlier is displayed on the back of her head. Confounded, asking how they were able to see through his ability, Joseph explains that he had not adjusted his arms to face a natural position; which he admits he usually forgets.

Addressing him as Idiot, Jotaro asks the location of DIO's room. Angered, the man leaps at Jotaro, adding that he has received DIO's blood; when Jotaro catches him on Star Platinum's arm, decided to use him in a test as to the durability of a vampire.

Pummeling him with apparently new and greater harshness, Jotaro sends the man flying, through part of a column. Alive, Jotaro threatens to cut him into pieces if he does not show them DIO's room. He agrees, before innocently asking how Jotaro knew that he was known as "Idiot."

A plot of the third floor of DIO's mansion is shown, before Polnareff is shown in a dark area at the middle stage of a staircase, having torn a piece of nearby curtain (of quality, he says) in order to bind painful wounds at his left knee and left foot sustained against Vanilla Ice.

Immediately, a shadowy figure appears, standing above Polnareff at the top of the stairs, hands at his hips. Light finally hitting his face, DIO and Polnareff acknowledge one another.