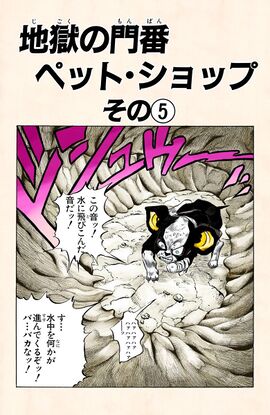 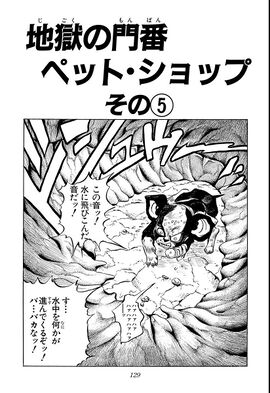 Hiding at the bottom of the Nile River, Iggy hears the sound of something diving into water. He suspects that it may be Pet Shop as an icicle pierces his sand dome. Iggy sees the blood lust in Pet Shop's gaze, unsure of how to react to the swimming hawk. Pet Shop shoots more ice missiles, which Iggy deflects with The Fool. The missiles are sent back towards the bird and severely damage his right wing. Pet Shop flees from the water, but not before completely encasing Iggy's dome in ice. Iggy's air pipes break, and the dome's structure begins to fall apart. Iggy has no choice but to dig into the riverbed. Even though he is missing a paw, Iggy is able to dig deep enough into the earth. However, he digs directly into an air pocket in the ground where Pet Shop awaits him. Pet Shop prepares to launch an ice missile from his mouth, leaving Iggy with only one option. Iggy collapses his sand dome allowing the water pressure to send him flying towards Pet Shop. The two come into contact, Iggy biting down on the hawk's beak with all his might. Pet Shop's beak shatters, killing the bird. Iggy swims up to the water's surface, but is completely out of energy and begins to drown. Iggy feels remorse, only wanting a calm and peaceful life. However, the boy Iggy had saved earlier sees the dog drowning and rescues him.