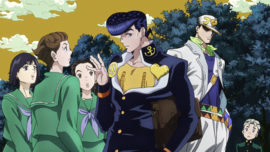 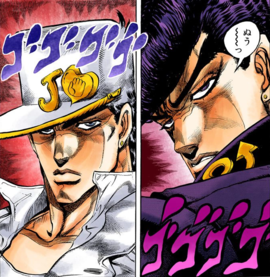 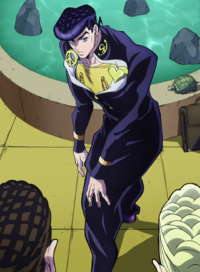 Before Jotaro is able to head for the bus stop he witnesses a student being bullied by seniors until it is revealed that he is Josuke. The bullies berate Josuke but are stopped when they insult his hair. This causes Josuke to reveal his Stand, Crazy Diamond, and punch the bully in the face breaking his nose. When he gets up the bullies point out that his nose repairs itself, but his face ends up looking much more ugly.

Jotaro approaches Josuke and reveals that his father is Joseph Joestar and that Josuke will get 1/3 of his inheritance when Joseph passes away. The affair bothers Josuke and he apologizes, insisting Joseph not worry about him or Tomoko. They are interrupted by Josuke's groupies frustrating Jotaro, and he insults Josuke's hair. In self defense Jotaro reveals his Stand, Star Platinum, to Josuke and explains the power of Stands. Jotaro is nearly injured by Josuke but uses his time stopping ability to narrowly escape. After their fight, Jotaro also tells Josuke to beware of a man lurking around in Morioh that Joseph discovered with Hermit Purple.

A man sees a pretty woman walking in the street and invites her for a ride. She subsequently beats him up. The man asks a police officer to help him but he says that woman is his daughter, Tomoko Higashikata. They discuss Josuke's conduct in school but are interrupted by a commotion at the supermarket, where Josuke and Koichi are located. There, a man is threatening to kill a woman. When he insults Josuke's hair, Josuke attacks him and the woman but heals them both using his Stand ability, but embeds the knife in the man's skin. The man was revealed to be possessed by a Stand that was depicted in the photograph Joseph created.