His Name Is Diavolo, Part 1 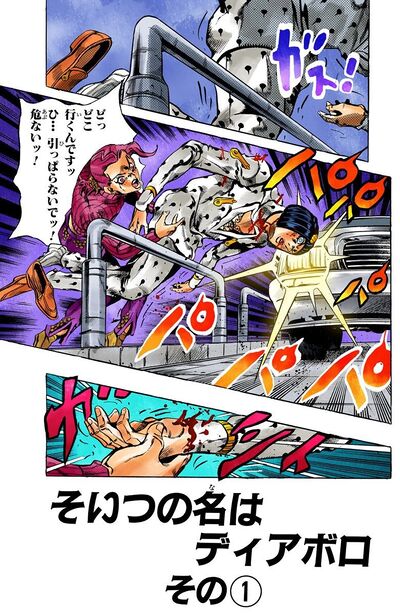 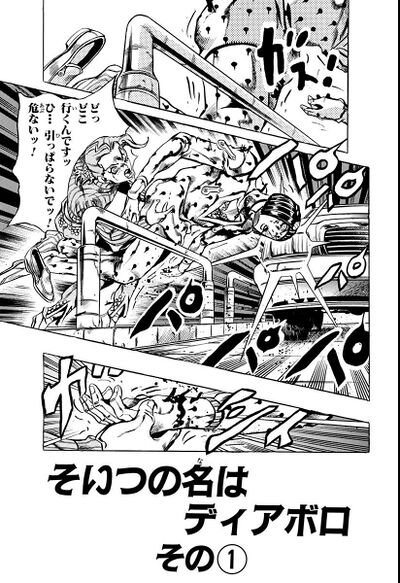 His Name Is Diavolo, Part 1 (そいつの名はディアボロ その①, Soitsu no Na wa Diaboro Sono 1), originally Is It Really You?! (君なのか!?, Kimi na no ka!?) in the WSJ release, is the one hundred twenty-ninth chapter of Vento Aureo and the five hundred sixty-eighth chapter of the JoJo's Bizarre Adventure manga.

Bucciarati trips over a small barrier, but Doppio catches his hand. Doppio notices many strange things about Bucciarati, such as his lack of heartbeat, breath, and his low temperature. As he carries Bucciarati to the Colosseum, Doppio sees Mista already inside the monument guarding the entrance, and hides with Bucciarati.

Diavolo contacts Doppio, explaining that Bucciarati is already dead, and can only perceive the souls of people, explaining his tripping. At the same time, Trish detects her father. Diavolo infuses some of his soul into Doppio, disguising it as Trish's. Since Mista has retreated to Trish to protect her, the way is open for Doppio.