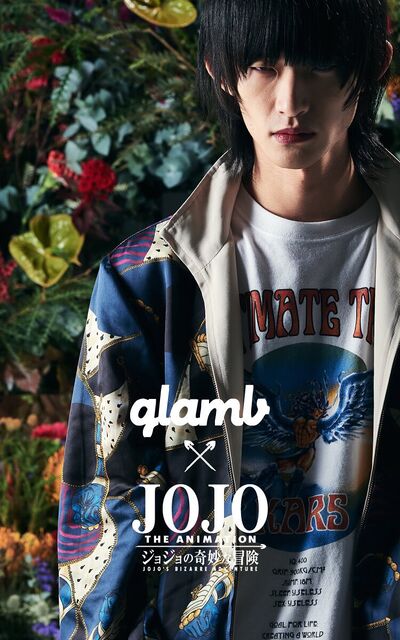 The line up was first announced in February 2017 and originally featured designs pertaining to the Diamond is Unbreakable anime. A second wave and third wave were released in March 2018 and September 2019 with a focus on Stardust Crusaders and Golden Wind respectively.

On February 2020, the brand introduced a fourth wave titled CROSSOVER COLLECTION featuring designs inspired from all seasons of the JoJo anime up to Golden Wind. As of December 2021, a fifth wave focusing on the Stone Ocean TV Anime has been announced.

Items are produced by Tokyo-based apparel brand "glamb," headed by famous Japanese designer and photographer Kan Furuya (古谷 完) (known by many as the chairperson of the Japan Twintail Association). Founded in 2003, the company's products are heavily inspired by grunge and street fashion, featuring stylized depictions of characters or Stands from the series.

Purchased through Bandai's apparel division website, the first wave included 11 collaboration T-shirts and a pair of pants, featuring the characters and stands from Diamond is Unbreakable. The T-shirts were offered in three colors (black, beige, navy) and four sizes (XS, S, M, L) with a release price of 7,452 yen (about 66.35 US dollars).[1]

glamb x JOJO was a collaborative event which featured a line of clothes that reference the Stardust Crusaders TV anime. Products included T-shirts, vests, jeans, and jackets. An exposition showcasing the clothes before their release took place from January 24 to February 4, 2018 at the glamb Tokyo building in Jingumae, Shibuya.[2] The seven-types of T-shirts and scarf began shipping in March 2018, while the other five items were released one month later.

A third wave was periodically revealed throughout 2019 and was eventually released to the public in September 2019. In collaboration with the Golden Wind TV anime, the lineup consists of 28 articles of clothing consisting of T-Shirts, sweaters, jackets, pants and even shoes. This wave is described as using Street art techniques to depict the gangs of both allies and enemies.[3]

Glamb's fourth wave titled "CROSSOVER COLLECTION" consists of 12 items featuring characters spanning from Phantom Blood to Golden Wind. Most of the T-shirts offered in the line-up have a choice of either white or black. The promotional artwork used for the collaboration matches those used for the JOESTAR The Inherited Soul animation event.[4]

A fifth wave was revealed on December 23, 2021 and will begin shipping in March 2022. In collaboration with the Stone Ocean TV anime, the lineup consists of 8 articles of clothing consisting of T-Shirts, Jackets and pants.[5]