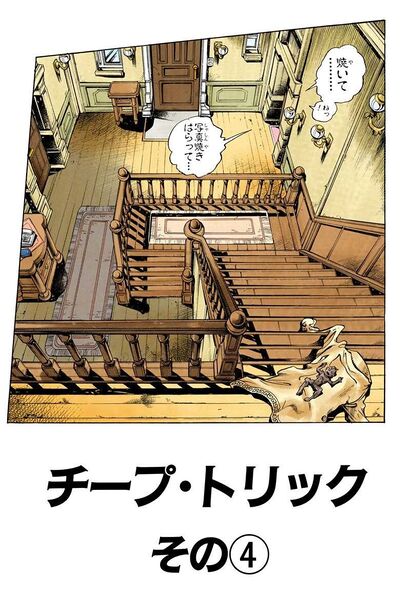 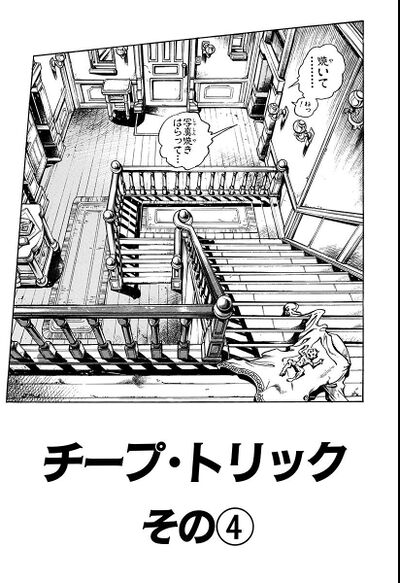 Cheap Trick, Part 4 (チープ・トリック その④, Chīpu Torikku Sono 4), originally Like I'd Burn Them! (絶対に焼くものか！, Zettai ni Yaku Mono ka!) in the WSJ release, is the one hundred fiftieth chapter of Diamond is Unbreakable and the four hundred fifteenth chapter of the JoJo's Bizarre Adventure manga.

Annoyed by Cheap Trick bound to his back and constantly telling him to burn the photos, Rohan plugs his ears with corks and band-aid, seeing that Cheap Trick doesn't have the strength to pull them off. Rohan examines the photos, determined to seek out the killer among the photographed men, but falls asleep from exhaustion.

Cheap Trick uses that opportunity to call several delivery services and calls them inside Rohan's workroom. They almost see Rohan's back, but the opening door bumps against Rohan's chair. Rohan wakes up at the last moment, turns his back, and sends them off, but he realizes that Cheap Trick is too dangerous and decides to go see Jotaro.

Outside, Rohan has many difficulties hiding his back. Arriving at an intersection, he cannot hide his back against walls but has the idea of constantly leaning against a passerby. Cheap Trick retaliates by insulting the passerby, prompting him to turn, but Rohan writes that he cannot turn around, gaining the upper hand again.