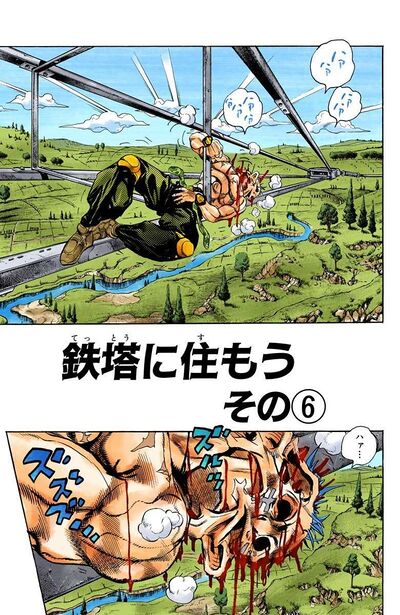 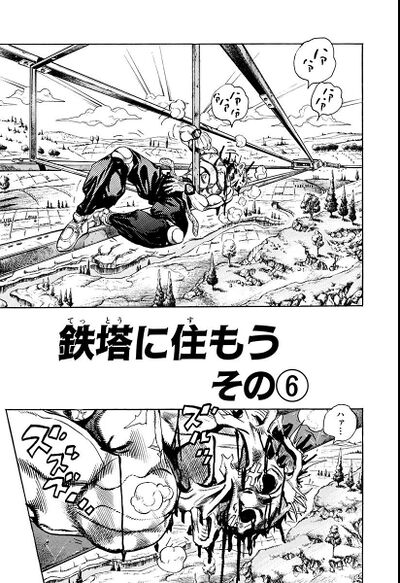 Let's Live on a Transmission Tower, Part 6 (鉄塔に住もう その⑥, Tettō ni Sumō Sono 6), originally One Last Trick! (最後の悪あがき！, Saigo no Waruagaki!) in the WSJ release, is the one hundred thirty-eighth chapter of Diamond is Unbreakable and the four hundred third chapter of the JoJo's Bizarre Adventure manga.

With Toyohiro taken out, his face starts bleeding. The blood drips near Crazy Diamond's hands and causes Josuke to start slipping off the beam of the tower. Josuke panics as there is nothing he can do to reassure his grip; Mikitaka cannot intervene fast enough, and Okuyasu is injured. Thinking this was revenge from Toyohiro, Josuke curses and threatens to beat him up even further. However, Toyohiro revealed he passed out for a moment and that it was an accident. He quickly advises Josuke to punch the beam and let the reflected damage from Super Fly send Josuke back up toward the tower.

When Josuke is safe, Toyohiro has a change of heart and apologizes, stating that the outside world seems scarier than the tower he knows and that deep down he never really wanted to escape. Toyohiro and Josuke make peace, and Toyohiro offers to heal him with medicinal herbs and cook for him but Josuke refuses because he knows the tower sprayed feces on the herbs and vegetables as fertilizer earlier.

Instead, Josuke asks Toyohiro what the old man in the photo told him, and he reveals that Yoshihiro Kira mentioned that Koichi was disposed of by another Stand user.