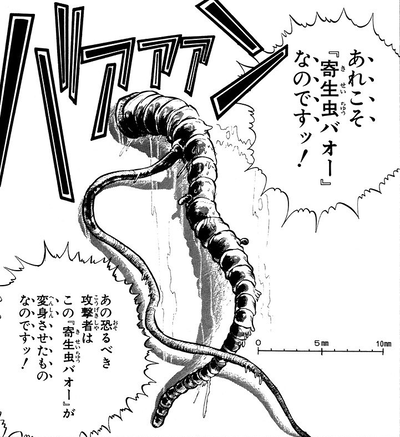 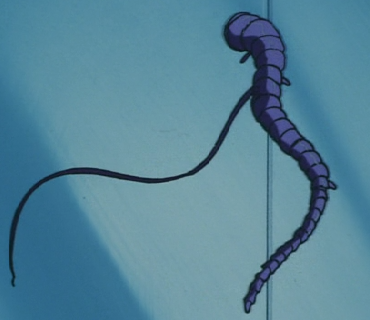 The Baoh parasite, in its larval stage, takes the form of a long, segmented worm of indeterminate evolutionary origin. Between its sixth and seventh bodily segment, a thin tendril emerges from the left side of its body, and trails down past the length of it.

The parasite is stated to be a product of "artificial evolution", by means of a special drug which allowed the manipulation of genetic material within cell nuclei; and the exposure of over a hundred different species of animals to extreme environmental conditions (e.g. extreme temperatures, minimal or limited oxygen, etc.). The survivors of these experiments, having adapted to their environment(s), would then reproduce. Consequently, their offspring would be stronger due to the development of neoplasms reflective of their parents' biological and environmental adaptations.[1]

Of what is known of the parasite's life cycle, it parasitizes the arteries leading to the brain.[1] It is said to be able to live up to 110 days in its larval stage, before growing into an imago. Subsequently, it lays its eggs inside of its host's body. Upon hatching, these larvae will tear their way out of the host's body, and disperse into the wild.[2]

The parasite itself also demonstrates a level of intelligence beyond what its appearance may entail, being capable of learning new information independent of its host[3] while in control of their body.

Baoh Armed Phenomenon (バオー, Baō Āmudo Fenomenon): By measuring the level of adrenaline produced by their host's adrenal medulla, Baoh is capable of detecting when their Host is personally in danger. Subsequently, it will transform their host into a "Baoh", and subsume their consciousness (likened to "mental anesthesia") in order to assume direct control of their bodily functions. In this state, their Host's cellular tissues are altered by a chemical secretion administered through the bloodstream, granting them a number of superhuman abilities, not including the individual "Phenomenon" (フェノメノン, Fenomenon) forms of attacks. Chief among them are superhuman strength and agility; regeneration; and the use of an unique extrasensory organ, the "Tactile Sensor".

Notably, however, it is shown that a host (namely Ikuro) is capable of developing a sufficient bond with the parasite as to utilize Armed Phenomenon while otherwise in control of his body and not transformed.[3]

User(s): All Baoh
Hosts of the Baoh parasite demonstrate exceptional strength and agility due to an enhanced musculoskeletal system. A dog who had been a Host for one month was capable of making cracks in 48 millimetres (1.9 in) glass. Additionally, Hosts have demonstrated the ability to leap several meters straight in the air, as well as cling to walls and throw stones hard enough to kill on impact.[2]
Hardened Skin

User(s): All Baoh
Debut: Baoh, the Invincible Body
The host's skin is rendered superhumanly durable, able to deflect small arms fire at point-blank, and even shield the Host (in the case of Ikuro Hashizawa) from the damage inflicted by a head-on collision with a vehicle. This hardening is reinforced by an accumulation of the waste products, generated by the Baoh Meltedin Palm Phenomenon fluid - protecting against its own corrosive effects.[4]
Suspended Animation

User(s): All Baoh
Debut: Baoh, the Ultimate Weapon
When the parasite or its Host ceases pulmonary respiration, such as when fully submerged in water, it undergoes a state of apparent death, and ceases aging. It can maintain this state theoretically for an indefinite amount of time, allowing it (and/or its host) to live up to hundreds of years without requiring sustenance or oxygen. Notably, the Host does not need to transform in order to make use of this ability.
Regeneration

User(s): All Baoh
Debut: The Extermination Order!
The host's body is able to live even after having vital body parts amputated. It will regenerate, ejecting any foreign objects (e.g. bullets) from the body via muscular contractions, and the body parts can reattach themselves upon contact. Hosts may use their blood to heal non-Hosts as well. However, Hosts can still die if their brain is destroyed, and the Baoh parasite subsequently incinerated.[2]
Tactile Sensor 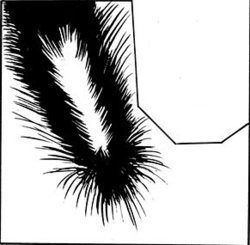 Superseding ordinary senses of sight, hearing, and smell, Baoh is gifted with a Tactile Sensor on their forehead, which allows them to perceive all animal emotions (e.g. "murderous intent", "sadness", etc.) as a sort of "scent". This sense may be disturbed by means of special compounds, as demonstrated by Dordo. The maximum effective range of this sensor is unknown, but is shown to faintly detect enemies several meters away from the Host (as in the case of Martin's Master).[1]

Allows a Baoh to secrete a special corrosive fluid (synthesized from their own bodily fluids[4]) from their skin, dissolving anything from human flesh, glass, or even metal. This has been shown capable of melting objects together (such as a handgun with a human hand), rendering both inoperable in the process.
Baoh Reskiniharden Saber Phenomenon(バオー・リスキニハーデン・セイバー・フェノメノン Baō Risukinihāden Seibā Fenomenon)

By manipulating the hardened skin tissue at both of his wrists, Baoh is capable of producing two blades that can cleanly slice through nearly any material. Baoh is also capable of using a ranged variation, known as Saber Off (セイバーオフ, Seibā Ofu), wherein he is able to launch the blades towards opponents at a distance. Kars' Light Blade was based on this attack.
Baoh Shooting-Bees Stinger Phenomenon(バオー・シューティングビースス・スティンガー・フェノメノン Baō Shūtingu Bīsusu Sutingā Fenomenon)

Through altering the chemical composition of his own hair follicles, Baoh is capable of shooting off needle-like darts of hardened hair which spontaneously combust upon contact with another creature's body heat.
Baoh Break Dark Thunder Phenomenon(バオー・ブレイク・ダーク・サンダー・フェノメノン Baō Bureiku Dāku Sandā Fenomenon)

By linking his nerves and muscle cells together in a similar fashion to an electric eel, Baoh is capable of producing and emitting a high-voltage electric current of 60 thousand volts from his body - enough to power a laser cannon which had been severed from its power supply.