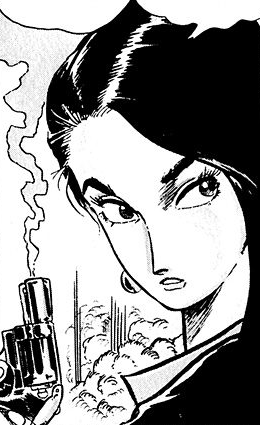 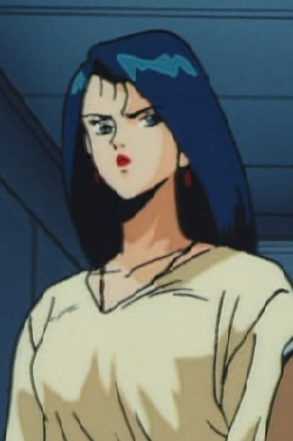 Executed by Dress (Manga)
Impaled by a stalactite (OVA)

Baoh (OVA)
“
Now, Sumire, I'm afraid you haven't been eating at all the way a young girl should. So I'm going to have to give you a little vitamin shot.
”
—Sophine, Baoh Chapter 1: Baoh, the Ultimate Weapon

Sophine (ソフィーヌ, Sofīnu) is a tertiary antagonist featured in Baoh the Visitor. In the manga, she is an unnamed agent working for the Secret Dress Organization. She is held responsible for the escape of Ikuro Hashizawa and Sumire.

Sophine is a pretty young woman with long dark hair. She wears a suit jacket and a miniskirt. Sophine wears round earrings with a large jewel embedded on each of them. Later in the OVA, Sophine wears a sweater tucked into a longer skirt.

Sophine acts like a gentle and playful caretaker to Sumire, although Sumire doesn't believe her and knows that she's only being nice because Dress wants to use her abilities. She shows that she doesn't care for Sumire when she privately calls her a brat because she's a troublesome prisoner, as well as believing that they should have sedated Sumire before putting her on the train.

She demonstrates a certain level of professionalism as a field agent, as when a group of rabid dogs tries to attack her, she calmly disposes of them after her initial shock. Sophine is seen to be slightly nervous when Dr. Kasuminome sees Sumire, as it means her failure to keep Sumire contained has been discovered.

Although she doesn't care about giving drugs to Sumire, she seems to have some morals as she hesitates to kill Ikuro Hashizawa when ordered to.[1]

Sophine seems to be a capable field agent. When a group of rabid dogs tries to attack her, she's able to beat them with ease. She also seems to favor kicks. It is shown that she's quite a good shot with her revolver.

However, her mundane skills are not enough against a powerful and resourceful psychic like Sumire.

Sophine was responsible for awakening Ikuro after letting Sumire break out and enter is cabin. Failing her mission to capture the two, she was disposed of by organization.

In the OVA, her appearance is slightly changed and she is given the name Sophine. Instead of dying after letting Ikuro and Sumire escape, she survives until the last scene where she is killed alongside Dr. Kasuminome.